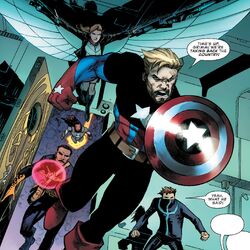 The Resistance was a small contingent of superheroes that opposed President Osborn's totalitarian regime. They were provided with technology and information by Gwen Stacy.

She directed the reality-displaced Spider-Man from the Prime Marvel Universe and his allies to the Resistance in hopes of finding somebody to help them figure out how to return to their proper timeline. After Captain America suggested getting Doctor Doom, the Resistance broke into the super-prison where he was being held, and confronted Ben Grimm in the process.[1]

The Resistance took Doctor Doom to the Oscorp warehouse where his Time Platform was stored so he could make the necessary preparations for Spider-Man to use it, but the building was quickly surrounded by Norman Osborn's forces. Gwen Stacy and Peter Parker, who had returned to the mantle of Spider-Man, appeared to hold the line, and the Resistance joined the fray not long afterwards. In the middle of the fight, Captain America was shot by Kraven the Hunter. This timeline's Spider-Man attempted to stop Kraven, but his webline missed the villain's weapon due to lack of practise.

Following Osborn's retreat since his forces were all defeated, Doctor Strange analyzed Rogers' body and discovered he was still clinging to life, and they all just needed to respark his flame within. Despite his reluctance to leave, Spider-Man and his allies prepared to return to their timeline, since Peter gave his alternate counterpart the assurance that he was going to continue fighting against Osborn.[2]

Like this? Let us know!
Retrieved from "https://marvel.fandom.com/wiki/Resistance_(Earth-51838)?oldid=5549959"
Community content is available under CC-BY-SA unless otherwise noted.