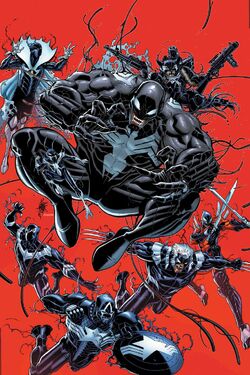 The Resistance was formed when the Doctor Strange of Earth-22249 came across a Venom symbiote being hunted by a Hive of crystalline aliens called Poisons.[1]

Finding himself hunted by the Poisons as a result of bonding to the symbiote, Strange began summoning Venoms from across the Multiverse; engaging in a brutal war with the Poisons. This backfired as it alerted the Poisons to the existence of the Multiverse and rapidly became a losing battle, as every member lost by the Resistance would become a member of the Hive, grossly turning the tables of every battle.[2][3]

The Resistance refused to give up, however, eventually summoning the Venom of Earth-616. This led to the Hive gaining Spider-Man and Captain America as members[4] and Doctor Strange as a captive.[5] Luckily, before his capture, Strange summoned a new player, Carnage, to the war.

Carnage's bloodlust gave the Resistance an upper hand in battle, and Poison Gwenpool was captured and interrogated because of this.[6]

New intel and the double agent Poison Deadpool allowed the Venoms to infiltrate the Hive's base on Earth-22249, taking out the Poison presence there and allowing most of the members to return to their many homes.[7]

Equipment: Numerous Venom Symbiotes
Transportation: Formerly Hell Charger, Ant-Venom's Ants
Weapons: The fangs, claws, and tendrils granted to them by their symbiotes, as well as whatever innate combat abilities the hosts possess.

Retrieved from "https://marvel.fandom.com/wiki/Resistance_(Venomverse)_(Earth-22249)?oldid=5549965"
Community content is available under CC-BY-SA unless otherwise noted.