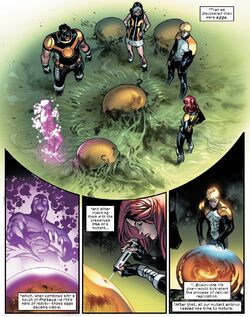 Brothers and sisters of Krakoa! A great thing has happened today. A miracle made possible by mutant hands...The great work of the five. Love them...for they have righted the wrongs of man and defeated our great enemy death.

The Resurrection Protocols were the rules, restrictions, and guidelines governing the process of mutant resurrection on Krakoa.

As part of the creation of the mutant nation of Krakoa, the Five were gathered to resurrect fallen and deceased mutants. Using Egg' golden eggs, Proteus manipulates reality to make the eggs viable, allowing Elixir to then use his biokinesis to fertilize the eggs and grow a husk body. Next Tempus manipulates time within the egg to grow the husk to its desired age. Additionally, Hope Summers allows for coordination between the other members of the Five and ensure resurrection is successful. Finally, when the husk emerges from the egg, Professor X (or a substitute telepath) telepathically imprints the mutant's mind from their most recent Cerebro backup into the husk. This processes usually takes between approximately 48-54 hours.[3] However, in extraordinary circumstances, this process can be completed in as little as one hour.[4] Mutants are resurrected at their "peak physical form", but the Five may also be unconsciously correcting minor imperfections as well. For example, one week after his resurrection, Synch demonstrated a 4% increase to his previously established natural abilities.[5]

Strict protocols were established early one to guide the terms of resurrection. These Resurrection Protocols offered structure and priority to govern the process of resurrection.[4] For example, as the governing body of Krakoa, members of the Quiet Council receive priority in the resurrection queue.[6]

Shortly after some of the earliest resurrections, a change was made to the Resurrection Protocols. For the mental wellness of those being resurrected, mutants are now being resurrected in established social groups or clusters. For example, Synch seemed to be experiencing difficulties adjusting after his resurrection, so Skin's resurrection was moved ahead of schedule so they could act as companions for one another.[5]

While the Quiet Council does consider the advice and input of the Five, X-Factor Investigations is ultimately responsible for making final decisions on resurrection.[7][8] However, in certain rare cases, others (like Beast and X-Force) are given ultimate authority over specific resurrections for security reasons.[9]

With resurrection made possible, there were concerns about depowered mutants committing suicide to be resurrected with their powers intact. Through several debates, the Quiet Council decided that for those who lost their powers on M-Day or were depowered by other means, resurrection with their powers fully restored could be made possible through The Crucible. When a depowered mutant was chosen for the Crucible, they must face • --|A|-- • in single combat and fight to the death. Only through valiantly fighting could the gift of resurrection and the restoration of their mutant powers be administered.[10][8][11]

Since • --|A|-- • is no longer on Krakoa,[12] Silver Samurai appears to have taken over the ceremony. Now, instead of facing • --|A|-- • in combat, depowered mutants wanting to restore their powers through the Crucible are allowed to invite their own combatants.[13][8][11] When no combatant can be found, volunteers are accepted.[13]

After successfully completing the Crucible, combatants are move to the head of the resurrection queue for a speedy resurrection. As noted by Doctor Nemesis, this practice is acting as a new evolutionary mechanisms. This selection process means that resurrection will favor traits like strength, endurance, warlike nature, and a certain level of personal recklessness.[11]

Following the death of the Goblin Queen during the Hellions' first mission, the Quiet Council and the Five agreed that clones should not be resurrected. Due to the similarities to their progenitors, they are not considered their own unique beings.[7][2][14] Evan Sabahnur, a clone of • --|A|-- •, hasn't been resurrected either, likely for the same reason.[15][14]

When Kate Pryde's lifeless body was discovered, her resurrection was made a priority of the Five.[16] The Five tried multiple times to resurrect Kate, but none of her husks appeared viable as none stirred or broke out of their eggs.[17] After 17 attempts, the Five were about to pause Kate’s resurrection to move on to others. However, through the supplication of both Nightcrawler and Emma Frost, Professor X agreed to one more attempt. On the eighteenth attempt, Emma guided Kate's husk to phase through the egg instead of bursting forth, and Kate was finally reborn.[18]

After creating the External Gate to connect Krakoa and Otherworld, • --|A|-- • sent Summoner with Banshee and Unus the Untouchable to herald his arrival.[20] When Summoner reemerged with a wounded and dying Banshee, he pleaded for help. To rescue Unus and assess the threat, • --|A|-- • led a small team of volunteers through the External Gate were almost immediately ambushed by the First Horsemen. During the attack, Rockslide was killed and both • --|A|-- • and Rictor were wounded.[21] Rictor died in the Healing Gardens after being brought back to Krakoa. As a casualty of war, his resurrection was fast tracked. Unfortunately, because Rockslide died in Otherworld, his resurrection did not go as planned even temporarily glitching all five Cerebros and left the Five and Xavier unconscious. As Otherworld is a nexus connected to the entirety of the Multiverse, when mutants die in Otherworld they cannot be properly resurrected. Instead, this resurrection will be a random amalgamation of their multiversal counterparts and their original Cerebro backup will be corrupted and lost forever.[4] Gorgon also died in Otherworld and was later resurrected, but is also reportedly acting "strangely".[22][23] Conversely to the Otherworld resurrections, individuals who died on Amenth were resurrected as more honed versions of themselves. Additionally, their actual Cerebro back-up were reduced in size resembling defragmentation of computer software. Both Wild Child and Nanny were resurrected as keener, sharper versions of themselves, but still certainly themselves.[22] The Five have chosen not to make this information widely available.[23]

The decision to prohibit the creation of duplicates was one of the first made when discussing the Resurrection Process. Additionally, it was decided that duplicates of other origin such as clones, time-traveling doubles or alternate reality counterparts would also be ineligeble for resurrection - or rather, only one of the duplicates would. The exception was made for mutants with duplication as part of their gifts, such as James Madrox and the Stepford Cuckoos.[14]

Like this? Let us know!
Retrieved from "https://marvel.fandom.com/wiki/Resurrection_Protocols?oldid=6513826"
Community content is available under CC-BY-SA unless otherwise noted.