Magical, Created by the scientist wizard Tus'au, resident of a dimension that combined sorcery and technology.

After its creation by Tus'au, it was sought by many within its dimension of creation, resulting a brutal war that led to the destruction of a "thousand, thousand planets" and eventually the gem's loss. Krru, a scholar, would spend much of his 5,000 year existence searching for its location. After finding it, Krru split the gem in two and sent the halves into two separate parts of Earth's past, then was almost immediately killed by a Skrull named Jaddak. 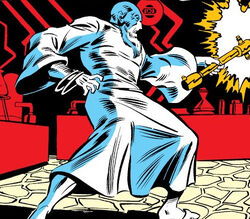 Jaddak then came to Earth and impersonated Edwin Jarvis and infiltrated Avengers Mansion, poisoning the Beast's then-girlfriend Vera Cantor. After telling the origin of the Resurrection Stone, Jaddak revealed that the only way to revive Vera would be to retrieve the two halves of the Stone. Grief-stricken, the Beast agreed; with Wonder Man, Vision, and Scarlet Witch agreeing to help him.

Gaining the assistance of Doctor Doom's time machine (in the custody of Reed Richards at the time), the quartet of Avengers was transported to the location of the first half of the Stone: September 16, 1348, 1:11 PM, England. The Avengers immediately found themselves in the middle of a large group of people suffering from the Black Death (Bubonic Plague). They were immediately taken to the wizard Devlunn, a child had lost his friends and family to the Black Death and who controlled one half of the Resurrection Stone, feeling it made him important. Controlling the Stone, Devlunn sent an army of animated corpses against the Avengers until the Beast managed to snatch the Stone from the boy's hand. The quartet then left the era, leaving a weeping Devlunn behind. 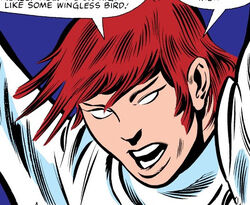 The Avengers then arrived on April 13, 1945 at 8:07 PM in Germany and immediately found themselves surrounded by German troops about to advance on a weakened group of American soldiers. Wonder Man quickly took charge of the situation, defeating the entire German contingent. When questioned as to whether they were Invaders or Liberty Legion members, the quartet "admitted" to being part of those groups, and the leading officer quickly dismissed Wonder Man's half-hearted claim at being Captain America, then led the group to the location of the second half of the Resurrection Stone: the Nazi death camp of Dachau. When the Avengers entered the camp they found a survivor, Sol Rosenblatt, attempting to revive his family with his half of the Stone. But, with only half the Stone, he was capable of bringing their souls back, but incapable of re-animating their bodies. This left his wife and daughter in a partial existence, their bodies decaying, but their minds still conscious. Seeing this, the Avengers considered what they could do to help. Eventually, Beast approached Sol, convincing him that the life he was giving them wasn't a real life, and that he had to let them go for their own good. Sol then said his goodbyes to his family and handed his half of the Stone to the Beast who, along with the other Avengers, was immediately transported back to where they'd begun their adventure. 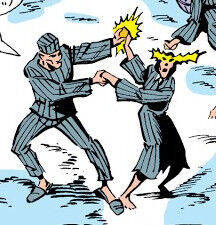 Before they had left, Jaddak had relocated himself and the body of Vera to a spaceship orbiting Earth. The Avengers, returning from the past, set out to meet the Skrull. Not trusting Jaddak, and seeing what the Stone had done, Beast crushed the stone to dust rather than allow Jaddak to control it. As he grieved over the loss of his girlfriend, the other Avengers assaulted Jaddak, with the Beast jumping in to lay the finishing blow, stopping just shy of killing the Skrull. The Avengers then returned to Earth, where they allowed Reed Richards to examine Vera's body, where he revealed that there was an outside chance he might be able to restore her.[1]

Presumably the dust of the stone could not be used to reconstruct the stone.

* Resurrection: Can revive the dead.