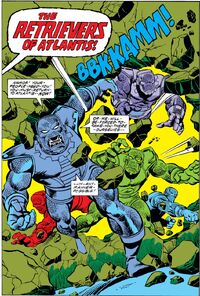 Base of Operations
Atlantis
Affiliations

The Retrievers of Atlantis are a group of androids used by the Atlanteans. The temporary rulers of Atlantis sent the Retrievers to California to forcibly return Namor to Atlantis. Namor had grown tired of being the ruler of Atlantis, and retreated to a movie studio that he purchased and arranged to have Susan Storm hired. When they arrived, the Retrievers were defeated by Namor and Sue when the leader was destroyed in the battle. The leader served as a power source for the other four. This android never spoke or participated in the battle, but when he was destroyed the rest simply shut down. After the battle, Namor decided to return to Atlantis anyway. [1]

Retrieved from "https://marvel.fandom.com/wiki/Retrievers_of_Atlantis_(Earth-616)?oldid=5549973"
Community content is available under CC-BY-SA unless otherwise noted.