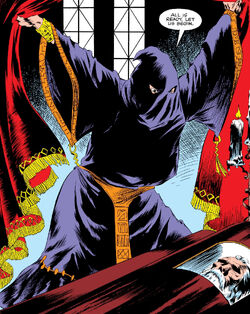 Reuben Davis grew up in Chicago, alongside Marc Spector and he studied under rabbi Elias Spector, and learned of the potential for magical power which could be obtained by mastery of Kabbalah, Jewish mysticism.

The death of Elias Spector unnerved Davis, who became fanatical that he be the only one to possess the knowledge of Spector's teaching. He gave Spector's eulogy and was reacquainted with Marc (now Moon Knight), whom he resented for abandoning his father over 18 years before. Davis assumed the identity of Zohar, exhumed Elias Spector's body, and brought it to the cellar below his apartment. While Davis did this, he hired Curly to send some a bunch of kids to vandalize the cemetery in order to make it appear as a random act of violence. Zohar used Spector's body to draw upon magical power for himself. In addition, he broke into Spector's house and stole the remainder of Spector's manuscripts.

Marc Spector was outraged by the theft of his father's body. As Moon Knight, he managed to track down Curly, who had been hired through several others, and had no idea who was behind the grave robbing. Marlene (Spector's girlfriend) encountered Zohar as he was stealing the manuscripts, but he blasted her into unconsciousness and escaped.

Zohar saw Marc Spector as sinful and rebellious, and prepared to make atone by blood. Davis contacted Marc and asked him to meet at the seminary chapel, in order to help him investigate the recent crimes. When Marc arrived, Zohar confronted him, blasted him to the ground, and shattered a large stained-glassed window over him, showering him in broken glass. Zohar left Spector for dead, and then attacked a class on the kaballah, intending to keep those secrets as his alone. Zohar blasted the students who tried to stop him, but was forced to flee after he was shot in the right arm by police.

Zohar returned to his cellar to seek a mystic remedy for his injury. Spector, meanwhile, had recovered from his attack, and recalling Zohar's words from Davis's eulogy, made the connection between the two. As Moon Knight, he located Davis' apartment and confronted Zohar. Spector used a mirror to turn Zohar's blasts back on himself, but Zohar then reanimated Elias Spector's corpse. Refusing to strike his father (as he actually had in his younger days), Moon Knight was being strangled by the corpse of his father. Marlene arrived on the seen, and remembering what she had recently learned, she erased the Hebrew letter "E" from the rabbi's forehead, sending it back to death ( EMETH=truth; METH=death, same deal as with the Golem). Elias Spector's body was returned to his grave, and apparently took Zohar's powers with it.[1]

Zohar possessed magical abilities enabling him to fire powerful bolts of mystic force, and reanimate the dead. He had extensive knowledge of Jewish mysticism, and presumably could recite other spells and perform other magical feats. The source of his powers was apparently the body of Elias Spector, and they apparently vanished after he was re-buried.

Without a body his powers are useless

Like this? Let us know!
Retrieved from "https://marvel.fandom.com/wiki/Reuben_Davis_(Earth-616)?oldid=5684350"
Community content is available under CC-BY-SA unless otherwise noted.