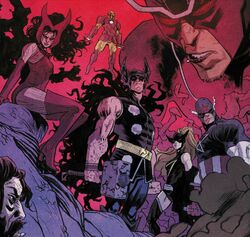 The Revengers were the Avengers of the Cancerverse after being corrupted by Lord Mar-Vell and turned into servants of the Many-Angled Ones.[1]

Due to Earth-616's Death not applying to the Cancerverse, the Revengers were brought back to life and tried to use a Cosmic Cube in possession of Star-Lord, who stayed in the Cancerverse with Nova (Rich Rider) and Drax the Destroyer to prevent Thanos from returning to their universe, to invade Earth-616 again, but Thanos was able to seize it from them.[4]

Later, led by Earth-616's Void, who was posing as the Sentry, the Revengers invaded the Negative Zone[7] and found Nova again. They tried to infect him again, but he managed to escape them once more.[8]

Retrieved from "https://marvel.fandom.com/wiki/Revengers_(Earth-10011)?oldid=5549975"
Community content is available under CC-BY-SA unless otherwise noted.