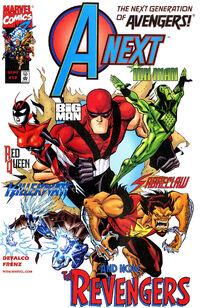 Origin
Formed by Hope Pym to destroy the Avengers.

Organized by the Red Queen to infiltrate Avengers Mansion and defeat the Avengers, the Revengers ambushed the Avengers as they returned from an alternate dimension. Once imprisoned, Red Queen tortured the members, revealing her plan to kill them. However, the Avenger known as Mainframe was downloaded to his home system where a new robotic shell waited for him. He gathered together several Avengers' allies and rescued his fellow Avengers. The Revengers were defeated in short order and Big Man had a change of heart, preventing his sister from using the mansion's self-destruct to kill them all.[citation needed]

Retrieved from "https://marvel.fandom.com/wiki/Revengers_(Earth-982)?oldid=5549979"
Community content is available under CC-BY-SA unless otherwise noted.