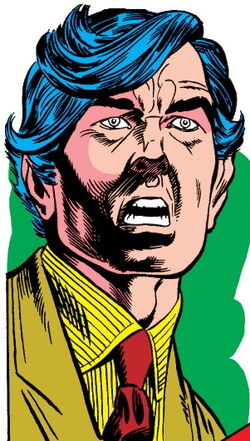 Eventually, Rex's sister Astrella told Adam Warlock the truth and, when confronted, the Man-Beast abandoned Rex's body. Astrella, Rex, and Warlock became Man-Beast's prisoners. With the Hulk's help, Warlock was finally able to defeat the Man-Beast and free Counter-Earth of his influence. Rex chose to stay President even though he was only President because of the Man-Beast's plans.[citation needed]

Counter-Earth was later destroyed by Thanos.[1] Rex and his sister Astrella are presumed deceased.

Like this? Let us know!
Retrieved from "https://marvel.fandom.com/wiki/Rex_Carpenter_(Counter-Earth)_(Earth-616)?oldid=5723264"
Community content is available under CC-BY-SA unless otherwise noted.