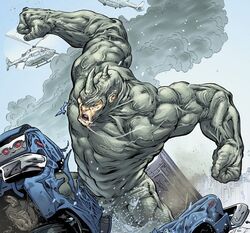 Rhino wears a a thick polymer mat suit similar to a rhinoceros hide, covering his entire body except for his face. The suit is highly resistant to damage and temperature extremes, and is also equipped with two horns, designed to mimic the general shape and appearance of real rhino horns, capable of penetrating 2-inch plate steel. His first suit, more crude in overall design, was originally bonded to his skin and he was unable to remove it.[1]

Spider-Man brought a piece of the Rhino's hide to Doc Connors for analysis. Together they create a reformulated webbing which burns through the rhino hide and was captured.[2]

Jackal later provided Rhino with a black version of the Rhino Armor which he used to break into Andry Correctional Facility to free Lizard and a depowered Electro.[4]

Retrieved from "https://marvel.fandom.com/wiki/Rhino_Armor?oldid=5565011"
Community content is available under CC-BY-SA unless otherwise noted.