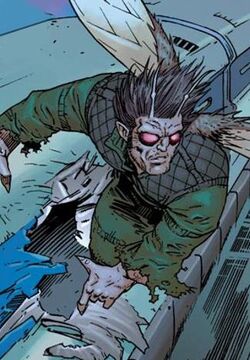 Hair
Brown ; formerly Red
Unusual Features
He has huge, lidless multi-faceted eyes like those of a fly, a pair of antennae coming out of his forehead, clawed fingers, and transparent membrane-like wings growing from between his shoulder blades.
Origin
Origin
Human granted powers similar to a housefly by a scientist.
Reality
Earth-616
Creators and Appearances
Creators
Bill Mantlo, Gil Kane
First Appearance
Amazing Spider-Man Annual #10
(January, 1976)

My wings are full of death poison! My belly full of-- glorff. You listening, Kingpin? I'm eatin' your assassin. You hear me chewin'?!

Richard "Rick" Deacon, alias the Human Fly had been in prison and his parole officer had sworn he had gone straight until he kidnapped an old man and heiress. While holding these hostages, kidnapper Rick Deacon was confronted by Spider-Man and shot by the Police. Wounded, he stumbled to Harlan Stillwell's Laboratory where he overheard J. Jonah Jameson asking Stillwell to create a new super hero.[1]

There, Deacon forced Stillwell to save his life and also give him powers. Stillwell imprinted Deacon with the genetic code of a housefly and Deacon became The Fly. In return for granting him super powers he then killed Stillwell and set about on a life of crime as the Fly. He kidnapped Jameson but was defeated by Spider-Man[1]. During his criminal career as the Fly he fought Spider-Man, the Black Cat,[2] Spider-Woman[3] and the Moon Knight.[4]

He began to lose his grip on humanity and acted more and more like a fly, being spotted eating garbage on scows. He blamed Spider-Man and J. Jonah Jameson for his loss of his humanity and planned to kill them both, but was defeated by Spider-Man and the Black Cat.[2]

After his last defeat by Spider-Man he was interned in the Brainstem Psychiatric Center for the Criminally Insane. The Scourge of the Underworld tracked him there and disguised himself as a caretaker of the asylum to approach him. But the Fly escaped form his padded cell, just before the Scourge reached it. The Fly then looked for Spider-Man, who was looking for the Hobgoblin. However, the Scourge then changed his clothes for those of a garbage collector (the Fly had never seen the Scourge's current mask) to approach the Fly. The Scourge killed him in a New York city alleyway.[5]

Year later, he was one of the many supervillains killed by Scourge who were resurrected by The Hood using the powers of Dormammu in Robbins's plan to kill Punisher. He gained an acid vomit as well as more resistant wings as result of an advanced mutation.[6]

After robbing money from the Kingpin, Deacon was targeted by Fisk's assassin Hobgoblin. By tricking Venom, who was guarding his prison transfer, Richard managed to escape and join Crime-Master's Savage Six in exchange for protection.[7] He captured Flash's mother and took her to the Lower East Side, where Flash interrogated him to discover Crime Master's whereabouts, tearing off both his wings.[8] He was later seen arrested at the Raft.[9] He has since been seen, free again, working for Boomerang [10]

Richard Deacon possesses various superhuman attributes as a result of having various genetic traits of a common housefly imprinted onto his own genetic code.

Superhuman Strength: Deacon possesses the proportionate physical strength of a 200 pound housefly. As a result, he is superhumanly strong and is capable of lifting approximately 3 tons.

Superhuman Stamina: Deacon's musculature now generates less fatigue toxins during physical activity than the musculature of an ordinary human. Deacon can exert himself physically at peak capacity for about 6 hours before fatigue begins to impair him.

Superhuman Durability: The tissues of Deacon's body are somewhat harder and tougher than those of an ordinary human. While far from invulnerable, Deacon is able to withstand impact and concussive forces that would severely injure or kill a normal human with little to no discomfort. For instance, Deacon can withstand a fall from a height of 40 feet without sustaining even the slightest injury, provided he lands on his feet.

Superhuman Agility: Deacon's natural agility, balance, and bodily coordination are enhanced to levels that are beyond the natural physical capability of even the finest human athlete.

Superhuman Reflexes: Deacon's reaction time is similarly enhanced. His reflexes are superior to those of even the finest human athlete.

Adhesive Capability: Deacon's toes and fingers are covered in small, adhesive-secreting glands that enable him to cling to most conventional materials, similar to that of Spider-Man though this ability isn't nearly as developed as his.

Multi-Faceted Eyes: Deacon's globular, multi-faceted eyes enable him to see 360 degrees above, around, or below his head at all times. Whereas human eyes confine perception to a narrow field of view, Deacon's eyes devote equal importance an all possible viewpoint angles.

Wings: Deacon is able to fly through the air via the use of tough, membrane-like wings. He is able to propel himself at speeds of at least 69 miles per hour. He is typically able to support his own weight plus an additional 150 lbs while in flight and still fly at his top speed. Deacon's wings produce a high pitched buzzing sound and he can vibrate his wings in opposite directions at tremendous speeds for the purpose of creating a powerful shockwave. At its maximum, the wave can hit with a concussive force equal to about 50 pounds of TNT. His wings have been shown to regenerate themselves if damaged or torn off.

Acidic Vomit: Deacon can produce an acid capable of destroying tissues and different types of metal.

Like this? Let us know!
Retrieved from "https://marvel.fandom.com/wiki/Richard_Deacon_(Earth-616)?oldid=6435081"
Community content is available under CC-BY-SA unless otherwise noted.