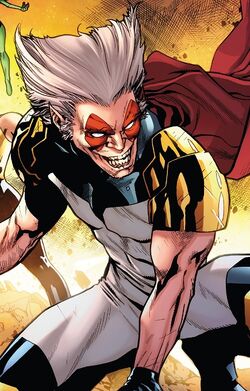 Wildside was one of the founding members of the terrorist organization known as the Mutant Liberation Front (or MLF). One of their first missions under the leadership of Stryfe was to liberate the incarcerated New Mutants members Rusty and Skids. They broke them out of prison and the pair joined the MLF out of confusion (and, as later evidence showed, neural implants kept them there).[1]

Under the leadership of Cable the New Mutants became the paramilitary organization known as X-Force, and began to be more aggressive in their campaigns. In one such mission X-Force discovered a hidden MLF base and, while fighting Wildside, Forearm, Reaper, and other members of the team nearly lost their lives when Stryfe ordered the destruction of the base.[2]

During another jailbreak of their "mutant brothers", Wildside and the MLF got in a fight with X-Factor while rescuing the Nasty Boys Slab and Hairbag.[3] He also led an attack on a clinic that promoted in utero mutant testing and elimination.[4]

Later, Garrison Kane stumbled upon Wildside, Forearm, and Sumo in the Canadian mountains and, after a brief scuffle, followed them through their teleportation portal, where he was tortured.[5]

During a series of supposedly unconnected art thefts (all of which were related to Apocalypse, Wildside and the MLF fought Cable multiple times.[6] Shortly after, a squad of X-Teams hit the MLF's main base, and Wildside was captured.[7]

Soon after, a tyrannical despot named Reignfire decided to restart the MLF. He broke Wildside, Reaper, Forearm, and Tempo out of prison and gave them their first mission: kill Henry Peter Gyrich. The MLF also picked up new members Locus and Moonstar. Their assassination attempt was foiled by X-Force, Locus and Sunspot became lost, but Feral defected to the MLF after having a heated discussion with Gyrich. The team left and was taught teamwork by Moonstar, as, at the time, their ranks were once again down to four — Moonstar, Wildside, Forearm, and Feral.[8] A few months later Reignfire began to hunt down his followers, taking Wildside and Forearm out first. All would have been lost if not for X-Force and Locus teleporting in to stop the madman.[9]

Next the MLF traveled to Muir Island where they meant to steal the Legacy Virus data from Moira MacTaggert. While there, they learned about the Xavier Protocols, and decided to try and steal them. If not for the covert efforts of Moonstar, the mission would have been a success, but instead the team teleported away.[10]

Later, the MLF once again was trying to steal data on the Legacy Virus, this time from a government institution who was trying to manufacture their own strain of the disease. They infiltrated the building and took the scientists hostage, but--once again through the sabotaging efforts of Moonstar--X-Force was let into the building to try and stop them. However, three of the scientists revealed themselves to be Prime Sentinels and began to attack. The two groups pooled their resources to tried and survive, but only X-Force (with Moonstar and Forearm in tow) managed to escape. The remaining members of the MLF were captured by operatives of Operation: Zero Tolerance.[11]

When he surfaced next, Wildside had been one of the many mutants captured by the revamped Weapon X Project and placed in their mutant concentration camps. The administration came to several mutants, himself and his former teammate Reaper included, and offered them an opportunity to join the Program in exchange for their lives. The two terrorists gladly jumped at an opportunity to cause mayhem again and accepted,[12] with their mission being to heighten anti-mutant sentiments. However, their tenure did not last long.[13]

Both men received upgrades from the Program and Wildside's included techno-organic claws which could be extended from his fingertips, as well as mental conditioning. The two were dispatched to take care of Cable and his new organization called The Underground, and were easily defeated. In an attempt to discover more information on Weapon X, Cable attempted to do a telepathic probe. However, the Program had installed mental firewalls in the minds of their operatives and Cable's effort caused the two to become brain dead.[14]

Yet he survived somehow, and was depowered from the events of M-Day, where most of the world's mutant population was stripped of their mutant genome by the Scarlet Witch.[15]

In the year 3086 of one of the seven prime timelines, Wildside appeared alongside a version of Stryfe and the original Mutant Liberation Front. Because of the time travel and multiple realities involved, it is unknown whether this Wildside was an alternate version of Wildside, Wildside of Earth-616 from an earlier point in his personal timeline, or Wildside-616 somehow repowered and reunited with the MLF.[16]

When the cabal formed by Emma Frost initiated the global saturation deployment of Mothervine, Wildside was revealed to have been enlisted as their personal enforcer alongside others bolstered by the drug.[17] Now showcasing all of his old abilities alongside some newer ones which made him all the more dangerous, but he was just as easily dispatched after being dealt with by Polaris.[18]

Wildside was eventually welcomed to the new mutant island of Krakoa, created by Xavier, Magneto, and Moira X. He entered through the teleportation gateway alongside other villainous and fractious mutants, who had been invited to join the nation in order to heal mutantdom and start over as a whole species together.[19]

Gill was formerly a depowered mutant.

Secondary Mutation: As an effect of Mothervine, Gill's powers were not only restored to what they once were, but greatly augmented in various ways.[18]

A group of MLF members including Moonstar, Dragoness, Forearm, Locus, Tempo, and Wildside were stated to include Alpha Class Mutants.[11] It is unknown if all or only part of them were included in the statement, or if it was even a true statement and not a pretext for Operation: Zero Tolerance to step in.

The Weapon X Program gave Wildside bionic hands. These hands could reshape and extend metallic claws from the fingertips.[20]

Like this? Let us know!
Retrieved from "https://marvel.fandom.com/wiki/Richard_Gill_(Earth-616)?oldid=5814954"
Community content is available under CC-BY-SA unless otherwise noted.