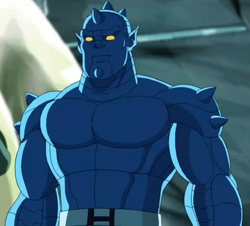 Rick Jones has been Hulk's best and only friend for years, ever since he accidentally parked his vehicle near where a gamma bomb was about to go off, Bruce was able to save Rick by hiding him in the trenches but this resulted in Bruce turning into the Hulk. Over the years Rick would help the Hulk in any way he could from those who would try to obtain and/or destroy him.

Because he doesn't like how the military have used Recording Observation Bot's to make his big green buddy look like a literal monster, who should be feared, he decided to use his own Spy Drones to show the world what kind of a hero the Hulk can be. Unfortunately when he brought up the idea Hulk wasn't interested.[1]

He later mutated into A-Bomb.[2]

Physical Transfomration: After being exposed to a weapon powered by gamma radiation designed for use against the Hulk, Jones was mutated by the radiation.

Magic: Learning from Doctor Strange, A-Bomb is capable of casting magic spells as shown when he was able to create a portal to Dormammu's realm, and alter Doctor Strange's house although some difficulty.

Like this? Let us know!
Retrieved from "https://marvel.fandom.com/wiki/Richard_Jones_(Earth-12041)?oldid=6106573"
Community content is available under CC-BY-SA unless otherwise noted.