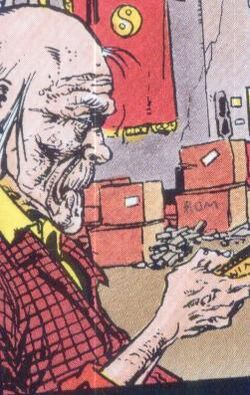 The elderly Rick Jones was the crippled leader of the resistance against the Maestro. He lived a museum of artifacts that had belonged to superhumans. He sent his granddaughter Janis Jones back in time with Dr. Doom's time machine to recruit the Hulk in order to defeat the Maestro. During the conflict, Rick was killed by Maestro. His ashes are spread by Hulk on Captain America's shield and thrown into space.[2]

Seemingly those of the Richard Jones of Earth-616.

Rick Jones, in his old age, was crippled and forced to live on a hi-tech wheelchair.

Like this? Let us know!
Retrieved from "https://marvel.fandom.com/wiki/Richard_Jones_(Earth-9200)?oldid=5859337"
Community content is available under CC-BY-SA unless otherwise noted.