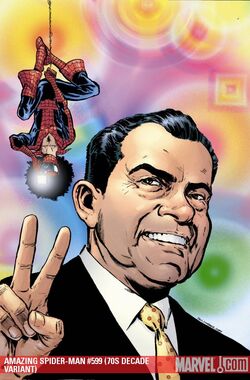 Nixon was the 37th President of the United States from 1969-74. In our reality, he is the only president to resign from office.

Presumably, his history on Earth-616 matches his real world counterpart. In addition, many appearances of Richard Nixon should be considered topical references per the Sliding Timescale of Earth-616.

In 1972, Richard Nixon threatened to shut down the First Line, a team of superheroes that were sponsored by the United States government at the time. This was during the height of the Watergate Scandal. In response, First Line leader Effigy became the secret informant known as "Deep Throat" to expose Nixon's involvement which ultimately led to his impeachment.[1]

Years after his death, Richard Nixon was one of the many former Presidents of the United States who were resurrected by the Necromancer. The group, led by Ronald Reagan tried to destroy the world, but were stopped by the mercenary known as Deadpool.[2]

The following appearances of Richard Nixon should be considered topical references:

Nixon was depicted as the President authorized the Fantastic Four to prevent an attack from The Sub-Mariner (secretly manipulated by Magneto)[3] only to regret, soon afterward, having listened to his wife Patricia: Namor successfully conquered the largest American city, New York City, while Richards insisted that the real threat was Magneto. Nixon prepared to wage war against Atlantis, but the Fantastic Four then defeated Magneto and convinced Namor to retreat, with all his forces, and without a single casualty.[4]

Nixon was depicted as the president who oversaw the Fantastic Four avert an attack on Earth from Galactus. Galactus demanded the Silver Surfer to follow him, and the Surfer agreed as long as the humans were not hurt. Nixon, following his advisers' counsel, ordered the Fantastic Four to comply, but Mr. Fantastic defied him and solved the situation in a different way.[5]

General Thaddeus Ross, in charge of Hulk-related operations, reported directly to a president depicted as Nixon, but always gave his trusted officer charte blanche, even when Ross' plans were heterodox: When Ross asked for an alliance with the villain Leader, Nixon allowed this, but assigned an official liaison - specifically vice president Spiro Agnew.[6]

Nixon was depicted as the president again during Thor and Odin's adventures in the World Beyond caused cataclysmic flooding and tremors around the world. He noted to his aides that, after all, it was "an election year" [7]

Nixon and his Vice-President Spiro Agnew, were depicted as the government officials who supported funding for Hulk Buster Base.[8] Later, when the Hulk was temporarily captured by Thunderbolt Ross and his Hulk Busters (again with help from the Fantastic Four), he was depicted again authorizing the Attorney General to place the Man-Monster on public trial.[9]

Nixon was depicted as the President who made inroads for equal rights for females when he authorized SHIELD to create an all-female assault team "Femme Force" with Sharon Carter as its first leader.[10]

The letters page of Captain America #175 tried to distance the parallel of President Nixon and his resignation from office. However Steve Englehart has stated his intention was for Number 1 the Secret Empire to be the President.[citation needed]

Like this? Let us know!
Retrieved from "https://marvel.fandom.com/wiki/Richard_Nixon_(Earth-616)?oldid=6475035"
Community content is available under CC-BY-SA unless otherwise noted.