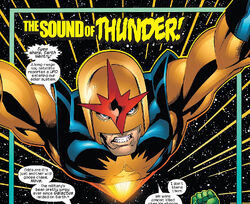 Nova was first seen when he wrongly believed Spider-Girl was a super-villain since she was fighting Darkdevil at the time. After a brief battle, Nova would later realize his mistake.

Over time, Nova has attempted to tutor and lecture Spider-Girl on the importance of being a super-hero. However, his arrogance and lack of patience with younger heroes caused his lessons to be largely ignored. However, the fact that Nova was a founding member of the New Warriors gave Spider-Girl the inspiration to form a new version of the Warriors.

Nova had served as a temporary Avenger. Nova also assisted in the battle against Galactus. His attitude towards Spider-Girl is often arrogant and dismissive, bordering on the contemptuous; but later he becomes impressed by her, after her surviving a battle against the Avengers' enemy Seth.[citation needed]

Richard Rider was at one point the host of the entire Nova Force, a vast energy source that he can apply to grant himself a number of superhuman attributes. As host to the entire Nova Force, which was previously used to empower all members of the Nova Corps throughout the universe, Rider is now possessed of tremendously augmented strength and durability as well as near limitless quantities of energy that allows him to hold his own against other powerful beings.


Superhuman Strength: Rider is able to channel the Nova force for the purpose of increasing his physical strength to vast levels. While the full limit isn't known, the Nova Force can grant rider sufficient superhuman strength to easily lift well in excess of 100 tons.


Superhuman Speed: By channeling the Nova Force properly, Rider can grant himself the ability to run and move at speeds that are beyond the physical limits of the finest human athlete. While the upper limit of his running speed isn't known, he can at least run several hundred miles an hour.


Superhuman Stamina: Due to the Nova Forces augmentation of his musculature, Rider's muscles produce considerably less fatigue toxins during physical activity than the musculature of a normal human. While the full limits of his stamina aren't known, he is able to exert himself physically for at least 24 hours before the build up of fatigue toxins in his blood impairs him.


Superhuman Durability: Rider's body is highly resistant to all forms of conventional physical injury. He can withstand high caliber bullets, falls from tremendous heights, exposure to extremes in both temperature and pressure, powerful energy blasts, acidic corrosives, and tremendous impact forces without sustaining injury. While employing the Nova Force, Rider can easily withstand the rigors of deep space indefinitely.


Superhuman Agility: Rider's agility, balance, and bodily coordination are enhanced to levels that are beyond the physical limits of the finest human athlete.


Superhuman Reflexes: Rider's reflexes are similarly enhanced and are superior to those of the finest human athlete.


Regenerative Healing Factor: In spite of his great physical resilience, it is possible for him to sustain Injury. If injured, Rider can purposely channel the Nova Force to rapidly heal damaged bodily tissues. The full limits and capabilities of his healing powers aren't known.


Flight: Rider can use the Nova Force to propel himself through the air at tremendous speeds. Nova is fully capable of achieving faster than light velocities, and often does, while traveling through space. However, moving as such speeds while in the atmosphere of a planet would cause devastation to the planet itself, so he travels much slower while on within a planetary atmosphere, generally at supersonic speeds.


Energy Generation: Rider can channel the Nova Force and expel the energy in the form of extremely powerful concussive blasts that he often uses in combat situations. A few of the abilities he has shown are, the ability to manipulate the near infinite energy of the Nova Force to create hyperspace portals in space such as Space Gates, he can release extremely powerful gravimetric pulses and beams, either from specific parts of his body or from his energy body surface, he can create powerful electromagnetic discharge that can nullify gravity.

Rider is a formidable combatant and has been trained by Chord, though he is naturally more comfortable at using the Nova Force's energy generating capabilities during combat. However, he can access the Xandrian Worldmind and instantly gain knowledge of Xandrian hand-to-hand combat techniques which he sometimes uses in combination with his energy powers.

While his strength limit is unknown, he has shown enough strength to easily lift well in excess of 100 tons. Whenever on Earth, Richard is easily one of the strongest and most powerful beings on the planet.

Rider uses the Xandrian Worldmind to help maintain his mood and mental stability. Without it, utilizing the full power of the Nova Force would overcome Rider's mental stability, causing a severe mental breakdown and possibly insanity.

The helmet contained radio circuitry enabling Nova to pick up radio transmissions, monitor transmissions, telescopic sights, night vision sensors, and heat imaging sensors, as well as overlay a visual heads-up display for tracking energy signatures. Nova's helmet has a rigid construction and shape when worn, but becomes as malleable as cloth when it is not, allowing Rider to hide it in his civilian clothes when desired.

Flight under own power.

Like this? Let us know!
Retrieved from "https://marvel.fandom.com/wiki/Richard_Rider_(Earth-982)?oldid=5773523"
Community content is available under CC-BY-SA unless otherwise noted.