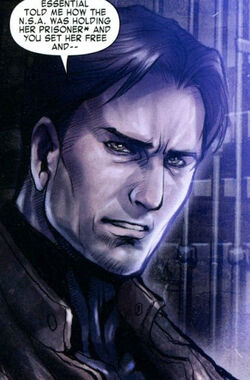 She's lying to us, Rossi. She was held prisoner by this man. Tortured by him--she's not there to follow and observe! She's going to kill him before we have the chance to find out what he's done with Ascension!

Rick Mason was a mercenary who specialized in the non-lethal handling of superhumans, having grown up exposed to advanced technology necessary for such tasks as the son of Phineas Mason, the criminal inventor known as the Tinkerer.[1] Another source of education were the likes of Nick Fury, Sir Denis Nayland, and Alexi Vazhin, among others, the experience he gained working alongside them making Mason a highly trained covert operative.[2]

Going freelance, he could only be found online under the codename: "The Agent", his clients including government agencies of America, the United Kingdom, Israel, France etc.[2]

Mason was hired to kill a CIA mole code-named "Vitamin" in Berlin. He blew up a hotel in an attempt to kill him but he was under observation by Michael Rossi and Carol Danvers. They tracked him across the city but he escaped using one of the Tinkerer's devices to become invisible.[3]

While working for the UK, the Agent fought three renegade members of China's China Force super-team, who were seeking to undermine the then in power British government in Hong Kong. This was followed by a similar situation in South America he was brought into by Nick Fury, during which he incapacitated or eliminated a quintet of super-powered mercenaries, thus allowing American-backed rebels to take over Costa Brava and install their leader as president. In the aftermath, Mason learned one of his old mentors, the Chinese geomancer Teng Yun-Suan, was responsible for these attempted coups, and was forced to kill him in the resulting face-off.[1]

Following this escapade, Mason was taken hostage by the criminal organization "The Corporation" in a failed attempted to force the Tinkerer to work exclusively for them. Mason managed to escape by himself, but encountered Luke Cage and Dakota North, whom the Tinkerer had hired to rescue him, and together they defeated the Corporation. Unfortunately, Mason was apparently killed later on, murdered by an unidentified super-villain, after which his activities as the anonymous Agent became public knowledge.[4]

Mason's son who was in the 5th grade died in Stamford, Connecticut when the Nitro exploded.[5]

Mason revived a message about "Ghazi Rashid" who was reported to be alive. It told him to go visit Michael Rossi's grave. Captain Marvel had also been sent the same letter to come to the grave. Rossi appeared revealing that he had faked his death and needed their help.[3] Mason and Danvers team up and used a Spider-Tracer to lure Spider-Man to them.[6] During the investigation the learned about Norman Osborn's operations and the sale of "Ascension" to Rashid. [7] They travelled on a jet to Hong Kong where it was revealed he was running his criminal empire. They kidnapped Zhou Chao from the Victoria Banking Initiative to trace the money to Rashid. Carol was sent to meet with Rashid [8] He revealed that Rossi was in fact the criminal know as "Vitamin" who wattack them all those year ago in Berlin. As Carol somehow blew up when overloaded with power. He tried to confront Rossi but he was gone leaving a bomb in his place and he only just made it out in time. He tracked him to Brazil where he shot Rossi, he then spoke with Osborn and got his father released from prison. As he left he threatened him for causing the death of Carol.[9]

Like this? Let us know!
Retrieved from "https://marvel.fandom.com/wiki/Rick_Mason_(Earth-616)?oldid=6462558"
Community content is available under CC-BY-SA unless otherwise noted.