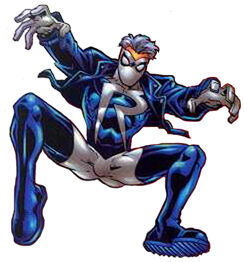 When Spider-Man was accused of murder he donned several different costumes to disguise his identity so that he could continue saving lives. One of the personas that he adopted was Ricochet. Starting with a leather jacket with an R on it, Parker's wife Mary Jane Parker created a costume and weapons. Ricochet was similar to Spider-Man, but even more jocular. He relied primarily on his agility, and posed as a criminal for hire. He worked with Delilah in searching for information about Black Tarantula, and they battled Roughouse and Bloodscream together.[1] Peter used all four of his new identities, to confuse his foes, and to contradict speculation that the new heroes were all, in fact, the same person. Once he had cleared his name, he abandoned all of his new personas.[2]

The golden age hero Black Marvel acquired the four costumes. He then proceeded to give them to four youngsters forming a team that he named Slingers. Lyons provided Johnathon Gallo with the costume and identity of Ricochet. Johnny readily accepted since as Ricochet he could freely use his powers to help people, without revealing his Mutant nature.[3]

Ricochet has special throwing discs which he stores on the sleeves of his jacket, four on each. These discs can bounce off walls and targets with incredible force. Later, Hornet gave Ricochet new discs that could explode on impact. Ricochet's super reflexes and coordination enable him to throw his discs with amazing speed and accuracy. In the Runaways series, Ricochet used an E.M.P. disc at one point, although where he got it is unknown.

Retrieved from "https://marvel.fandom.com/wiki/Ricochet%27s_Suit?oldid=5789426"
Community content is available under CC-BY-SA unless otherwise noted.