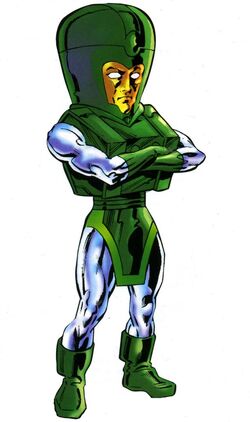 Imperial Rigel was a polity of colonies that stretched across the stars.[1] Colonizer fleets were constantly monitoring the cosmos for any worlds that suited the needs of the Rigellians.[2] Within the Rigellian empire, existed a department called the "Division of Claims". When a Colonizer staked his or her interest in colonizing a world, they filed their claim with the department.[1]

An inspection team would then be dispatched to the world to assess their claim. Upon the inspectors' satisfaction, the Colonizer would declare his or her intent to the planet's inhabitants. As the Rigellians expected the world's inhabitants to resist their claim, a space lock would be moved to the planet's orbit, subjecting the natives to extreme weather events to pacify them.[1]

As warriors the Rigellians depended too much on their technology. Adam Warlock considered their offensive tactics to be basic, informed them that defensively they were pathetic, and that they lacked spirit. Rigellians had neither the brutal drive of a Skrull, the disciplined tenacity of a Kree, or the detached ruthlessness of a Shi'ar.[3]

Rigellian society had a mutant class, beings with deformed bodies and minds. They were underground dwellers, a sub-species that the Colonizers had created in gene-vats. It was a race descended from the survivors of a doomed experiment.[4]

The Rigellians were a race of space colonizers. Threatened by the expansion of the Black Galaxy and Ego's attacks, they sought new worlds to colonize for when they would have to leave their home planet. A Rigellian colonizer, Tana Nile, tried to take control of Earth, but was not taken seriously by the authorities.[5]

Later, when the Black Stars set out for their home planet, Rigel-3, all Rigellians fled it in a desperate attempt to survive. Thor arrived and rescued the Rigellian mutants that had been left to die by the normal Rigellians. Not long after Rigel-3 had been fully evacuated, the Black Stars destroyed it.[4]

Psionic abilities allow them to control other humanoids' minds or overpower the bodies of other humanoids. They can also alter their physical density thereby granting themselves superhuman strength.

77% covered by water in a temperate climate

Technocratic empire with officials chosen for their high intelligence quotient.[6] It was the Grand Commissioner who possessed ultimate authority in the Rigellian empire.[7]

Retrieved from "https://marvel.fandom.com/wiki/Rigellians?oldid=5653870"
Community content is available under CC-BY-SA unless otherwise noted.