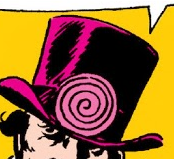 Ringmaster used the spinning lines on his hat to hypnotize the audience of his circus, in order for the Circus of Crime to rob and loot the helpless victims.[1]

Some time later, Spider-Man used Ringmaster's hat to hypnotize him and find out where Masters of Menace were hiding.[2]

Like this? Let us know!
Retrieved from "https://marvel.fandom.com/wiki/Ringmaster%27s_Hat?oldid=6436524"
Community content is available under CC-BY-SA unless otherwise noted.