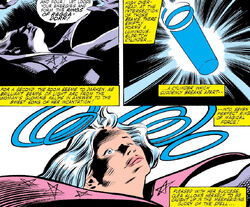 Seven Rings has Raggadorr, from indigo to deepest black! Their fabled might we now implore...Grant us the power to force these back!

The Rings of Raggadorr was a spell that summons a cylinder of perfect magical force that separates into seven powerful circular bands.[9] The Rings range in color from indigo to black.[10] This versatile use the Rings for offensive attacks,[2][11][10] to bind opponents,[3][12][13] or to protect locations for mystical attacks.[14]

When brought before the Living Tribunal, Doctor Strange was held within the Rings.[1]

Doctor Strange summoned the Rings to bind Stygyro during a battle though he quickly broke the Rings.[13]

While preparing for fend off Alaric, Doctor Strange summoned the rings to protect the Sanctum Sanctorum, Manhattan, and the United States. Unfortunately, Alaric's easily cut through the defenses with his Sword of Kamuu.[14]

During a battle with Azrael, an artificially aged Doctor Strange mustard his strength to combine the Rings of Raggadorr with the Crimson Bands of Cyttorak to entrap Azrael. This gambit successfully banished Azrael.[8]

Clea successfully used the rings to destroy two possessed gargoyles that were attacking her and Wong.[11] Although, later while practicing the spell, Clea began to lose focus leading Doctor Strange to assault her with the Vapors of Valtorr, the Winds of Watoomb, and the Crimson Bands of Cyttorak to test her. With the additional distractions, Clea was unable to hold the spell.[9]

During her attack on Thor, Umar the Unrelenting trapped Thor in the Rings.[15]

Like this? Let us know!
Retrieved from "https://marvel.fandom.com/wiki/Rings_of_Raggadorr?oldid=6432349"
Community content is available under CC-BY-SA unless otherwise noted.