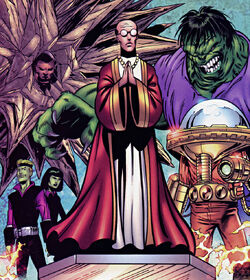 Base of Operations
Freehold
Affiliations

When the Leader detonated a gamma bomb in the town of Middletown, Arizona, later known as "Gammatown", only a few of its population of nearly 5000 survived, all mutated by gamma radiation: teenager Jess Harrison, given psionic force-field powers as Jailbait; her boyfriend, Louis Lembert, able to project energy blasts as Hotshot; attorney Diane Davids, transformed into the super-strong Ogress; salesman Burt Horowitz, who gained the superhuman intellect of Omnibus; and Father Jason McCall, given the power to resurrect the dead as Soul Man. Joining with Rock and Redeemer as the Riot Squad, they became the protectors of the Leader's Freehold base where people who had contracted terminal illnesses from radiation found sanctuary. Members of the team first clashed with the Hulk when the Leader provided him with information to use against Madman.[1]

They later joined the U-Foes in distracting the Hulk from a meeting between the Leader and the Pantheon's head, Agamemnon. Unfortunately, they did not fare as well against a Hydra attack on the Freehold, which left Soul Man dead even as he was in the process of resurrecting Rick Jones's girlfriend, Marlo Chandler.[2]

With the Leader also seemingly dead, his position was taken over by Omnibus who, not content with the Freeholders' peaceful existence and apparently possessed by the Leader's surviving consciousness and mind control powers, manipulated Major Matt Talbot and others in the U.S. government in his own power-seeking plans. However, when his compatriots learned that he was responsible for the worldwide bombings in the name of the fictitious terrorists of the "Alliance," they worked with the Avengers to shut down his remaining bombs, then judged him guilty and sentenced him to death. Not believing his claims of being controlled by the Leader, they left him to die in the Arctic.[3]

Regrettably, Omnibus's absence left the Freehold open to an invasion by the Troyjans, and the Riot Squad fared no better against these enemies than they had against earlier ones. The current status of the Riot Squad and the other citizens of the Freehold remains a mystery.[4]

Retrieved from "https://marvel.fandom.com/wiki/Riot_Squad_(Earth-616)?oldid=5009725"
Community content is available under CC-BY-SA unless otherwise noted.