Marvel Database
Register
Don't have an account?
Sign In
Advertisement
in: Events, Earth-616, Rise of the Midnight Sons

Rise of the Midnight Sons

Rise of the Midnight Sons 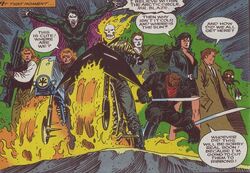 For eons, the walls between our earth and the supernatural realms have held fast… until now. Now those walls are weakening, and Lilith, Queen of Evil, Mother of Demons, has risen from her slumber to shatter the walls and free her hellish spawn. Only the strangest of alliances can drive her back... a union of old enemies and new heroes, in a battle forever to be remembered as the… Rise of the Midnight Sons

Lilith, the Mother of Demons, was a powerful necromancer whose origins date back to pre-Cataclysmic Atlantis. Thousands of years ago, Atlantean sorcerers defeated Lilith and imprisoned her within the remains of the Biblical Leviathan. Lilith left behind many children, which she called her Lilin. Over the course of centuries, the Lilin began to breed with normal humans, and their demonic blood was diluted with every passing generation. The body of the Leviathan remained buried for millennia until discovered in recent years in the frozen wastelands of Greenland.[1]

At this time, Doctor Strange became aware that Lilith was regaining power and would soon rise from her long slumber. He also knew that she intended on opening a dimensional rift that would enable her to conquer the world with her Lilin brood. As the Sorcerer Supreme of the Earth realm, Strange knew that his magic was actually too potent to combat Lilith directly. Such a display of power would only serve to open the rift even further, strengthening Lilith's foothold on Earth. The key to stopping Lilith lied with nine chosen warriors – the Midnight Sons. Individually, each one possessed only minimal power, but joined together they had the potential for permanently stopping Lilith's advance. When Lilith finally emerged from her torpor, Strange set about gathering as many of the mystic Nine as he could find.[1]

During this time, the Ghost Rider began experiencing visions, which forecast the coming of Lilith. He convinced his former host, Johnny Blaze, to join with him in fighting against her. Johnny was reluctant to involve himself with the Ghost Rider again, but knew that his family would be placed at great risk if he failed to help out. Calling themselves the Spirits of Vengeance, Ghost Rider and Blaze were actually the first to fight up against Lilith's offspring. One of them, Blackout, a proverbial "grand-child" of Lilith, was also one of Ghost Rider's known adversaries. The Spirits of Vengeance fought Blackout, as well as the Lilin, Pilgrim and Creed, outside of Providence, Rhode Island.[2]

Shortly thereafter, Lilith, Blackout and Pilgrim traveled to New York to locate two more of her Lilin, Nakota and Fang. Lilith also knew that Ghost Rider and Blaze had recently arrived in New York in search of another of the Midnight Sons – Morbius, the living vampire. She instructed Fang to stop Morbius, so Fang infected Morbius' blood with his own demonic Lilin blood. The infection produced a mutative effect, that made Morbius stronger and more vampiric. Doctor Strange approached Morbius, and asked for his aid in combating Lilith. Morbius, disgusted with his nightmarish existence, readily agreed.[3]

The next three members of the Midnight Sons included Victoria Montesi, Louise Hastings and Interpol agent Sam Buchanan. All three were charged with locating and protecting the lost pages of the Book of Sins, the Darkhold. After an encounter with Darkholder cultists, these so-called Darkhold Redeemers agreed to join the fight against Lilith.[4]

Doctor Strange then arranged for vampire hunter, Blade, to be freed from a mental hospital. Blade reunited with his longtime allies Frank Drake and Hannibal King. Using King's detective agency, Borderline Investigative Services as a headquarters, the three men became known as the Nightstalkers. Lilith sought to manipulate the Nightstalkers into killing Ghost Rider and Johnny Blaze, explaining to them that the two were actually demons. After a brief altercation with the Spirits of Vengeance, the Nightstalkers soon learned that Lilith was their true foe.[5]

Lilith, having gathered all of her surviving Lilin, returned to Greenland and prepared to open the dimensional doorway. Doctor Strange used his magic to teleport the Midnight Sons to that same location and the opposing sides began to war with one another. While the Midnight Sons fought admirably against the Lilin, it was actually Ghost Rider who managed to defeat the Mother of Demons, by turning her own dimensional rift back onto herself. Lilith and the Lilin were forced to flee, but they were greatly weakened by the battle. Undeterred, Lilith vowed to get revenge against the Midnight Sons.[6]

Rise of the Midnight Sons Event: Episodes and Synopses