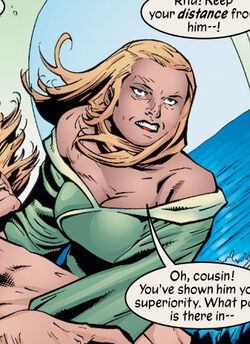 Rita is the cousin of Numenor, Emperor of Bensaylum. Numenor hoped that she would marry him and produce his heir, although she had rebuffed all suitors he had presented prior to her introduction and pointed out that he could just as easily find a consort to produce his own heir. When the Four from the Fantastick arrived in Bensaylum, Rita fell in love with John Storm. She later protected John and his sister Susan from the Sandman and revealed that Numenor had allied with Count Doom to enslave the two of them and kill their companions, Richard Reed and Benjamin Grimm.

Rita, apparently the only survivor of Bensaylum's destruction, clung to a piece of driftwood in the middle of the Atlantic Ocean, crying for help and being watched by an impassive Uatu the Watcher.[1]

Seemingly those of Namorita of Earth-616.

Rita is skilled in hand-to-hand combat.

Like this? Let us know!
Retrieved from "https://marvel.fandom.com/wiki/Rita_(Earth-311)?oldid=4855891"
Community content is available under CC-BY-SA unless otherwise noted.