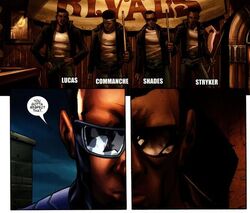 The Rivals is a gang that operated in the Harlem, New York. Luke Cage (born Carl Lucas) spent his childhood in the gang along with his friend Willis Stryker. Lucas engaged in many gang fights with The Diablos, a rival gang. He also committed petty crimes and worked for a crime lord named Sonny Caputo. The gang's other member included Comanche and Shades.[1]

Later the name of Nightshade's organization, with Cottonmouth and the Flashmob as members.[2]

Retrieved from "https://marvel.fandom.com/wiki/Rivals_(Earth-616)?oldid=4545431"
Community content is available under CC-BY-SA unless otherwise noted.