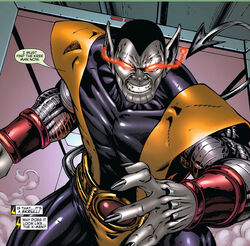 Rl'nnd was the son of Rm'twr, a Skrull who was killed by NASA head of security Carol Danvers long before she became Ms. Marvel.[1]

As part of the Skrull Secret invasion, Rl'nnd was part of Skrull Black Bolt's attack on the Illuminati. Though caught up in a massive explosion at the end of that fight, Rl'nnd survived and was next seen at an A.I.M. base preparing to go on a mission to find a Kree man, revealed to be Ms Marvel's boyfriend, William Wagner. At the same time a Skrull posing as Ms Marvel had already got to Wagner.[1]

Rl'nnd is also a Super-Skrull given the powers of several X-Men, much like Paibok the Power Skrull, as opposed to the Fantastic Four Super-Skrull. Rl'nnd's X-Men powers include:

Like this? Let us know!
Retrieved from "https://marvel.fandom.com/wiki/Rl%27nnd_(Earth-616)?oldid=5657318"
Community content is available under CC-BY-SA unless otherwise noted.