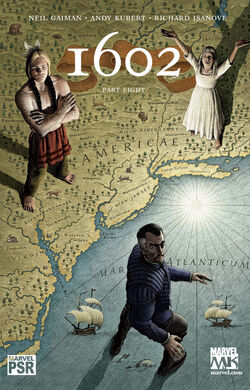 The Roanoke Colony, also known as the Lost Colony, was established on Roanoke Island in what is today's Dare County, North Carolina, United States of America. It was a late 16th-century attempt by Queen Elizabeth I to establish a permanent English settlement. The colony was founded by Sir Walter Raleigh.

During the age of Vikings; Varnae traveled to the new world and attacked a Norse colony in North America turning the settlers into Vampires. A young girl escaped and prayed to the gods for help and Thor answered the call and battled the hordes of Vampires and eventually facing the first vampire himself. He was able to drive off Varnae and destroyed the vampire settlers by directing sunlight at them leaving only the young girl alive.[1]

In 1591, the young girl arrived at the English colony of Roanoke. She was revealed to be a vampire and turned all the 121 settlers into vampires leaving only one message carved into a tree "Croatoan".[1]

When Captain America of Earth-460 was transported back in time to the late 16th century before the Europeans discovered the Roanoke colony, thus creating Earth-311, the colonists of the colony later on didn't disappeared in 1587 due to Steven Rogers' time displacement. By 1587, the colony was struck with hard times as the European immigrants were unfamiliar to their new environment, especially with living dinosaurs, until they were helped by the Native Americans and Steven Rogers, then calling himself Rojhaz. By 1602, the colony was thriving, but under hard times from lacking any supplies from Europe, and lead by governor Ananias Dare, whose daughter Virginia gained the power to transform upon touching the time rift caused by Rogers' arrival. The colony was the nearby center of where the time destabilization that was affecting Earth-311 before everything returns to normal with Steven Rogers transported back to his time by Nicholas Fury, who also disappeared with Rogers.[2]

After the events of Rojhaz and Fury's disappearance, King James I sent a contingency of English soldiers lead by Captain Ross to retrieve David Banner, and then occupying Roanoke after learning that the colony became independent and refuse to recognize James' rule. A conflict erupted at a climax between the English, Natives and colonists until all participating parties ceased to fight after Virginia Dare convinced them to stop by transforming into a giant sphinx-like creature and threatened to eat them. Afterwards, the English left the colony along with David Banner in tow, leaving Roanoke independent and start to allow the Native Americans to be a part of their representing government of the New World.[3]

Some years later, Roanoke prospered greatly as colonists and Natives mingle satisfactory, and even some local dinosaurs are used as beast of burden and pets. After Norman Osborne tricked the Natives into suffering with smallpox, relationship between the Natives and the colonists deteriorated.[4]

Like this? Let us know!
Retrieved from "https://marvel.fandom.com/wiki/Roanoke_Island?oldid=5482106"
Community content is available under CC-BY-SA unless otherwise noted.