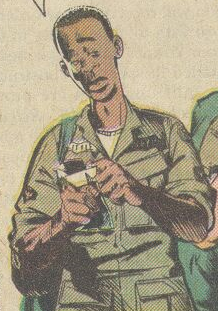 Rob Little was a friend of Ed Marks' in Vietnam.[1]

Rob had known Top since he was a mere staff sergeant.[2]

Little was assigned in the field with a squad of Sgt. Polkow's platoon.[3]

Rob Little led a squad in the Paul Revere mission where Ralph Marchese was killed.[4]

Little asked his squad to volunteer helping a tunnel runner in an underground Việt Cộng base.[5]

He also participated in the Tay Ninh Province mission where Mike Albergo was killed in action.[6]

In late October of 1966, Rob was assigned by Polkow to patrol Saigon during National Day.[7]

He later participated with Ed Marks in Operation Cedar Falls.[9]

In February of 1967, Rob bade farewell to Lt. Fenelli and Ed Marks when they returned home.[10]

One month later, Rob was introduced by Polkow to Lt. Alarnick, their new platoon leader.[11]

The next month, Rob lost a letter from Ed Marks during a mortar attack.[12]

In June of 1967, Rob was told by Sergeant Rowland that new replacement troops were due to arrive.[14]

Some time later, Little was eventually injured by a grenade blast.[15]

Rob was treated at the Chu Chi Twelfth Evac Hospital.[16]

Like this? Let us know!
Retrieved from "https://marvel.fandom.com/wiki/Rob_Little_(Earth-85101)?oldid=5541751"
Community content is available under CC-BY-SA unless otherwise noted.