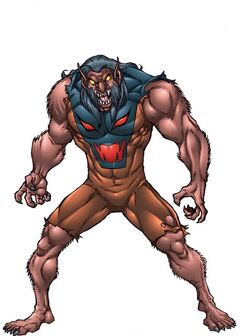 Since the moment I acquired my dog powers -- people have been making a mockery of my canine capabilities!

Robert "Buzz" Baxter was born and raised in Centerville, California. He was a childhood friend of Patricia "Patsy" Walker, and was depicted in her mother Dorothy's comic-book about Patsy. Baxter and Walker married after high school.[3]

Baxter then joined the Air Force. When he was promoted to captain, he was assigned to the Brand Corporation as a security consultant. He began investigating Henry McCoy and the Beast, not realizing that the two were the same person.[4] During this time, his marriage with Patsy began to deteriorate and they eventually divorced.[5]

When the Brand Corporation was taken over by Roxxon Oil, he began working for Hugh Jones and assisted him in hiring the Squadron Supreme to defeat the Avengers.[6] He was in charge of keeping the Avengers prisoner after they returned from the Squadron's world and were defeated by Orka, but was overpowered by Patsy, now the heroine Hellcat who forced him to free her friends.[7] Buzz was one of the witnesses in the Tribunals' trial of the Defenders.[8]

Roxxon's Mutagenic Department augmented Buzz Baxter's abilities, transforming him into the unstable Mad-Dog. Working for Professor Power and the Secret Empire, Mad-Dog attacked Patsy's wedding to her second husband, Daimon Hellstrom, but was driven off by the Defenders.[9]

Placed in S.H.I.E.L.D. custody, Mad-Dog escaped when the fellow prisoners Mutant Force did so.[10] He became an agent of the third Secret Empire. As security chief, he aided the Secret Empire and its leader, Professor Power, in an attempt to start World War III. Together with Mutant Force, he battled and was defeated by the Defenders.[11]

Much later, Mad-Dog abducted and intended to kill Hellcat, but was defeated by her.[12] He joined Crossfire and other costumed criminals in an attack on Hawkeye.[13] He also unsuccessfully attacked the Fantastic Four during Acts of Vengeance.[14]

In Toronto, Baxter was caught up in the violent influence of the release of the Ska'r. He fought Gamma Flight, but was teleported away by Manikin's future self.[15] Roxxon hired him and Angar to lead a group of operatives in a twofold mission: infiltrate and destroy S.H.I.E.L.D. The villains stormed the S.H.I.E.L.D. Helicarrier, but the new Super-Agents of S.H.I.E.L.D. eventually defeated Baxter and other villains.[16] He fought Crossbones, as the first of five competitors at a super-villain convention on Boca Caliente and was quickly defeated.[17] He was later present when Captain America, Diamondback, Falcon, and Shang-Chi battled numerous villains on the island.[18] He next worked with Taskmaster when he was sent to test the skills of Siren, an Ultraverse immigrant to Earth-616.[19]

Mad-Dog eventually went through further mutation and married a woman named Rachel. He was involved in a Secret Empire scheme to take over a high school as directed by Professor Power; however the new Nomad stopped their scheme and the villainous pair was forced to go on the run from the Empire, but Professor Power was captured. Mad-Dog continued fleeing the Empire, and Nomad went looking for him, seeking how to find the Secret Empire. Mad-Dog is eventually reached with the help of Araña. However before Baxter could say anything, he was blasted by a floating, mechanized orb. He was later strapped by Professor Power to an operating table to receive his punishment.[20][21]

The next time Mad-Dog appeared, he was summoned by high school classmate Hedy Wolfe, Patsy's rival. Hedy told Mad-Dog that Patsy had a cure for his mutation, prompting Buzz to seek his ex-wife. He attacked a karaoke bar Patsy frequented with her friends and had a fight with her new assistant Jubilee. Outside the club, he found Hellcat being tortured by her other ex, Daimon (whom Mad-Dog mockingly called "Hell-boy"). Mad-Dog proceeded to go after Patsy, who tried to convince him Hedy was lying. The struggle only ended once Daimon used his powers to send Hellcat to another dimension.[22]

Mad-Dog was one of many animal-themed superhumans captured by Taskmaster and Black Ant for Kraven the Hunter's Great Hunt. In the ensuing chaos, Mad-Dog died after being hit in the chest by four arrows shot from a Hunterbot.[23]

Superhuman Strength: The various procedures Baxter subjected himself to augmented his musculature, connective tissues, and skeletal structure. As a result, Baxter is superhumanly strong. At his peak, he possesses sufficient strength to lift up to 5 tons.

Superhuman Speed: Baxter can run and move at speeds that are beyond the natural physical limits of the finest human athlete.

Superhuman Stamina: Baxter's superhumanly enhanced musculature is much more efficient than the musculature of an ordinary human. As a result, his muscles produce considerably lower amounts of fatigue toxins during physical activity. Baxter can exert himself physically at peak capacity for about 24 hours before the build up of fatigue toxins in his blood starts to impair him.

Superhuman Durability: Baxter's augmented bodily tissues are tougher and much more resistant to conventional physical injury than those of an ordinary human. Baxter can withstand small caliber bullets, powerful impact forces, temperature extremes, and falls from great heights without sustaining injury. However, it is possible for him to be hurt if he is attacked with a sufficiently powerful force or weapon.

Superhuman Agility: Baxter's agility, balance, and bodily coordination are enhanced to levels that are beyond the natural physical limits of the finest human athlete.

Superhuman Reflexes: Baxter's reflexes are similarly enhanced and have been augmented to levels that are beyond the natural physical limits of the finest human athlete.

Superhumanly Acute Senses: Baxter's senses of smell and hearing have been enhanced to levels similar to those of an actual dog. He is able to detect sounds beyond the natural range of hearing for an ordinary human. He can also detect standard sounds that a normal human can ordinarily detect, though at much greater distances. Baxter's sense of smell is sufficiently enhanced to allow him to detect, remember, and track a person by his or her scent.

Superhuman Jaw Muscles: Baxter's jaw muscles have been augmented to grant him a much more powerful bite force than an ordinary human, which he often uses in combat situations.

Fangs & Chemical Poison: Baxter has also been given strong, elongated canine teeth that increase the efficiency of his augmented bite force. These teeth can also emit a chemical that resembles the foaming saliva of a dog afflicted with rabies. This chemical is actually a highly potent poison that can cause paralysis or even death if it enters a person's bloodstream via being bitten by Baxter. Baxter himself is immune to the effects of this toxin.

Baxter is a formidable hand to hand combatant, even without the use of his superhuman powers since he received advanced combat training while serving as a member of the U.S. Air Force.

Like this? Let us know!
Retrieved from "https://marvel.fandom.com/wiki/Robert_Baxter_(Earth-616)?oldid=6483110"
Community content is available under CC-BY-SA unless otherwise noted.