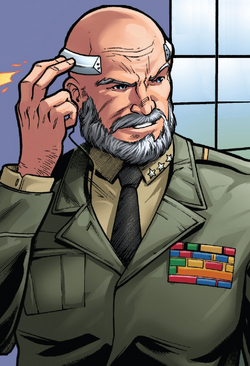 General Callahan acts as the commanding officer of the reinstated O.N.E. organization, which has been secretly funded and re-purposed for the suppression and incarceration of Mutants and mutant related super activity.[1]

What the general public as well as his superiors don't know is that the good/bad commander has a tendency to exceed his authority and commit a great many violations of the Office's, not to mention the government which funds their organization, many policies.

Having taken to incarcerate the Reavers after the flailing Alpha Flight program passed them off into his care.[2] Using them as his personal cyber-augmented militia on the false pretense that he'd let them off after capturing a host of mutant criminals to add to his collection. Only to betray his own word when it was convenient to keep them onboard.

Having fitted their cybernetics with an electronic leash while ordering the rest of Pierce and Cylla's crew to be terminated without abandon.[1]

An altercation of which would inevitably draw the attention of a gathering of loosely affiliated X-Men; that being Havok, Beast, Warpath, Banshee, Dazzler and Colossus. Stepping up after a slew of Reaver attacks they were involved in put them in the crossfire between Robert's people and the robotic dregs he'd ordered excommunicated.[3] Naturally this gave him the excuse he needed to build up his public profile and add more test subjects to O*N*E's laboratories.

To that end he would send out a media news bulletin about how the affiliated mutant terrorists attacked an office of National Emergency sanctioned strike team, as well as pin the blame for all the Reaver deaths he'd sanctioned upon them.[4]

While his men were busy prodding and experimenting on some of their captured number, the remnants of both X-Men and Reaver forces combined their efforts to storm the general's Location 22 base where he kept them prisoner. While he was busy making a deal with McCoy, that he'd offer his services to them in place of the life of his teammate Alison.[5] Alex Summers instigated a combined assault which enabled the freedom of both parties associates. An alliance which soon crumbled when the Reavers revealed what Callahan had been using them to track for him.

A kind of advanced technological module that Callahan had intended to use to upgrade his O*N*E Sentinel's with.[1] In the aftermath of the battle at the Xavier institute in New York city, Havok brokered a deal with the corrupt commander, wherein he would turn himself in willingly. On the condition that his friends be left alone and he wouldn't leak recordings that would reveal all of Mr. Callahan's many misdeeds to the local media.[6]

After all of the X-Men's apparent demise, he started manipulating the Black King to do his bidding. They caught many mutants, and used the last X-Men as well.[7] They used a lot of mutants for their powers and killed a lot of them too. Then, the Black King erased mutants from every persons' minds, or so she thought.[8] O*N*E did not forget at all about mutants. Callahan sent the Sentinel Squad to attack and kill them all. After many casualties, Wolverine saw him and sliced him into two, killing him.[9]

Like this? Let us know!
Retrieved from "https://marvel.fandom.com/wiki/Robert_Callahan_(Earth-616)?oldid=6429460"
Community content is available under CC-BY-SA unless otherwise noted.