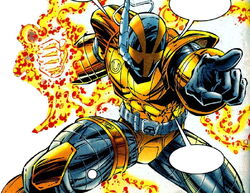 Bob was the initial pilot for the Prototype armor. However, Bob was intentionally injured by Ultra-Tech in an accident so James Ruiz could replace him. Bob was approached by Aladdin and given a variant armor. He began adventuring as Ranger.[citation needed]

Like this? Let us know!
Retrieved from "https://marvel.fandom.com/wiki/Robert_Campbell_(Earth-93060)?oldid=5740494"
Community content is available under CC-BY-SA unless otherwise noted.