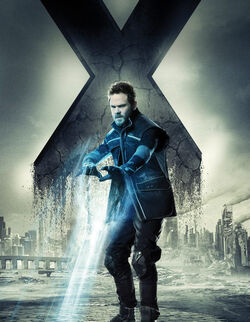 Bobby Drake is a mutant with the ability to freeze moisture in the air for various effects, such as creating ice sheaths around his body, ice-weapons, and ice-walls. Bobby was a student at Xavier's School for Gifted Youngsters, brought to the school under the guidance of Charles Xavier. His family did not know of his mutation, and thought the school was a prep school.

When Rogue arrived at the school, Bobby became immediately smitten. He first impressed her in class by getting one of the other kids in trouble, and then, after introducing himself, gave her an ice crystal shaped like a rose. He asked her out for lunch a few days later, but Rogue had left the school, when Mystique, disguised as Bobby, tricked her into thinking that she needed to leave the school. They began a relationship soon afterwards.[1]

He was also friends with Pyro (the kid he got in trouble earlier) before Pyro left the school and joined the Brotherhood of Mutants. Following an attack on the school by William Stryker the three of them escaped with Wolverine and retreated to Drake's family home in suburban Boston. After Bobby revealed his mutation, his disgruntled brother Ronny called the police, telling them that mutants were holding his family hostage. He and Rogue eventually became members of the X-Men.[2]

Iceman became entangled in a love triangle between Rogue and Kitty Pryde despite the fact that it was merely Rogue's belief, and Bobby and Kitty had no romantic attraction to each other. When Bobby started comforting Kitty after the Professor's death, this caused Rogue to choose to be cured of her mutation. When Bobby learned of this from Colossus, he went to the Mutant Cure facility to intercept her.

As he arrived too early, however, he instead ran into Pyro, who proceeded to destroy the building after Bobby backed down from a fight. He finally battled Pyro one-on-one at Alcatraz Island when the Brotherhood were trying to kill Leech, the source of the mutant cure. During a intense elemental stalemate with Pyro, Bobby was able to 'ice up', grabs Pyro's arms to disable his ability to manipulate pre-existing flames and knocks him out with a hard headbutt. He then carried him to safety when Jean Grey tried to destroy the world under the influence of the Phoenix Force. Rogue came back to the school after the battle, and the two rekindled their relationship.[3]

Days of Future Past

In the dystopian future of the original timeline, Bobby Drake was one of the few Free Mutants left on the planet and one of the last of the surviving X-Men. In Moscow, along with fellow survivors Sunspot, Blink, Warpath, Colossus, Bishop and Kitty fight against a deployment of Sentinel Mk Xs that had managed to find their hiding spot.

Bobby helped keep the Sentinels off of Bishop and Kitty as they went into a room so that Kitty can alter the immediate past, but in the process, all the Free Mutants that fought against the Sentinels were killed one-by-one, with Bobby getting beheaded in ice form from a superheated Sentinel with grip alone, who then crushed his head underfoot.

With Kitty and Bishop successful in changing the past by jumping four days into the past to warn the Free Mutants of the attack, the Free Mutants then joined with Storm, Professor X, Wolverine, and Magneto in an abandoned monastery in China, where Xavier tells of his plan to have Kitty send someone back in time to 1973 to change the past for a better future, with Logan volunteering.

Eventually, he Professor X, and Magneto went to the X-Mansion to rescue Rogue from the Sentinels so they could use her to absorb Kitty's powers to keep Wolverine in the past. Then as they were escaping, Sentinels attacked them and Bobby sacrificed himself so Magneto could get Rogue out and accomplish the mission, much to her and Kitty's distress. The future was changed in the end and he was alive and well with Rogue.[4]

Seemingly those of Bobby Drake of Earth-616.

Like this? Let us know!
Retrieved from "https://marvel.fandom.com/wiki/Robert_Drake_(Earth-10005)?oldid=6108958"
Community content is available under CC-BY-SA unless otherwise noted.