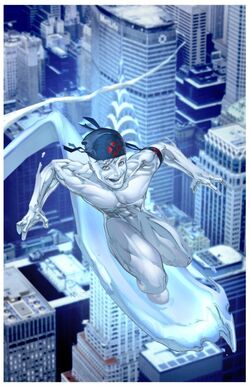 Well this is a whole thing all of a sudden, ain't it?

When he was fifteen-years-old, the government-sponsored Sentinels began tracking and killing mutants. Young Bobby Drake ran away from his family in New York City to protect them, fearing that the Sentinels would kill him and/or his family if it was discovered that he was a mutant.[7]

Also in New York, Professor Charles Xavier, a mutant rights activist and mutant himself, used his psychic-enhancing machine Cerebro to locate Bobby. Sending his team of assembled mutants on their first mission, the X-Men found Bobby alone and scared on a bus in downtown New York City. Before the X-Men could offer Bobby a place alongside them at Xavier's School for Gifted Youngsters, a group of Sentinels attacked. Just as a decapitated Sentinel was toppling over onto a group of innocent bystanders, Bobby took action and froze the robot in mid-fall, saving the bystanders below and giving the Beast a good reason to christen him "The Iceman!" Bobby's heroic act, however, didn't stop the bystanders from hurling glass bottles and bricks at the Bobby, the "mutie freak."[7]

At the time, Bobby had a girlfriend. Wanting Bobby to join his team, Professor Xavier erased her from Bobby's memories, because Bobby had told her too much about the X-Men, and Xavier feared that Bobby would stay with his romance over joining the team.[citation needed]

Believing the X-Men - as well as influenced by Xavier - to be a righteous place, Bobby accepted their offer and became an X-Man. He was, at that time, the youngest member, being fifteen. Taking the codename Iceman, Bobby quickly became a valuable asset to the team. At one point he single-handedly took out all of the Ultimates with a gigantic ice wall; on another occasion, he halted an invasion by Colonel Wraith and Weapon X solo. Only Rogue, temporarily in control of Marvel Girl's telepathy, was able to stop Iceman. [citation needed]

Bobby was severely injured by Xavier's son Proteus [8]. Furious at Xavier for his reckless treatment of their son, Bobby's parents withdrew their son from the Institute and threatened to sue. Displeased with his parents' desires, Bobby rebelled, took the time to heal, and returned to the X-Men. Fully healed, Bobby returned to the X-Men in a dramatic fashion. Being hunted by the government, Bobby appeared and saved all of his friends and teammates, displaying great control over his powers.[citation needed]

Upon her acceptance into the X-Men, Bobby began to date Rogue. The pair dated for a considerable amount of time until they grew apart due to Bobby's growing feelings for Shadowcat and Rogue's feelings for Gambit, who convinced Rogue to leave with him. Kitty and Bobby parted and Rogue returned to the X-Men, this time lacking her own powers and sporting those of the now-deceased Gambit. Now able to touch people, Bobby and Rogue began to date one another again.[citation needed]

Iceman fought Hammer, who showed amazement over Iceman's clumsiness. Hammer had referred to him as "the Legend!" His comments led to the belief that Bobby would gain a much greater control over his powers.[9]

When Cyclops disbanded the X-Men [10] and Bishop and Storm created a new team, Iceman stayed at the Institute as a student only until Xavier returned and reformed his X-Men. Professor X was later discovered to be alive and the X-Men returned to the Xavier Institute, which was also when Iceman rejoined the X-Men line-up. Jean Grey soon revealed that fellow X-Man, Colossus, was using a drug called Banshee to enhance his mutant abilities. The X-Men were strongly against this, but Colossus managed to convince Rogue, Dazzler, Angel, Nightcrawler, and Cyclops to join him on his own X-Men team. Iceman remained on Professor X's drug-free X-Men and fought the Banshee-enhanced X-Men. Xavier's X-Men won and the two teams combined again with nobody using drugs.[11]

The Ultimatum Wave hit the X-Men, killing several of the X-Men (Beast, Dazzler, and Nightcrawler). Magneto and the Brotherhood attacked the world and Iceman helped the world's heroes fight them off. Most of the X-Men died, but Iceman (alongside Rogue, Storm, Colossus, Kitty, and Jean Grey) was able to survive Magneto's attack. He was among the X-Men demolishing the X-Mansion alongside Rogue and Jean Grey and burying the deceased X-Men in its place. He found it hard to destroy their home, but he felt it to be the right thing to do now that Professor Xavier was dead.[citation needed]

Mysterio and Living with the Parkers

After parting ways with the X-Men, Bobby couldn't find a place to stay after his family couldn't accept his mutation. He found his way to Queens and briefly hid himself at Kitty Pryde's home for some food. Kitty's mom found Bobby and objected to the idea of him staying; Bobby's problems were solved after Kitty sought Peter Parker's Aunt May for help. Aunt May agreed to let Bobby stay with them along with Johnny Storm/Human Torch.[citation needed]

A few weeks later, both Johnny and Bobby returned to the Parker house after a night of double-dating to find the Six looking for Peter with the intention of killing him. A quick battle ensued, with Johnny knocking Norman out cold, but he was defeated by Sandman, while Bobby was defeated by Electro, rendering both of them unconscious. He eventually wakes up only to find that the battle was over and that Peter had died.[citation needed]

Without knowing where to go after Peter's death, Bobby Drake asked Kitty Pryde if Johnny could come with them searching for a place where to live and hide from authorities. They found the Morlock Tunnels where they hid and helped other fugitive mutants. First they rescued Rogue, who joined them, and later Jimmy Hudson (the son of Wolverine), came to them for help after escaping Stryker's imprisonment along with other mutants he freed.[12]

After witnessing the cruelties mutants were made to suffer in the Sentinel controlled Southwestern states, Kitty Pryde decided to leave the tunnels and fight to free the mutants interned in camps there. Bobby agreed to come and help her, despite the fact that Johnny decided to stay in the tunnels and look after the children. With help from Nick Fury, the mutant insurrection was successful in destroying the Sentinels and freeing the mutants.[13]

Cryokinesis: Iceman is a mutant who can absorb and release heat by manipulating thermal energy. He is able to lower his body temperature without causing harm to himself. He has the capacity to manipulate all forms of moisture and possesses all of the abilities to generate unusually hard ice to form projectiles, slides and shields that are strong enough to stop bullets. He can travel rapidly along these ice-slides or ice-bridges by causing ice to form rapidly beneath and behind his feet, pushing him along the slick surface. Iceman has created constructs of ice so powerful that he was able to easily encase and contain the likes of the Hulk. He is also able to summon moisture from the air and create floods, blizzards and/or snowstorms. Iceman's mutant powers are so vast that it extends to the molecular level, to the point that he can freeze all of the molecules of an object/being with a thought, as well as unfreeze it.[12]

Ice Body: In his ice form, Iceman has enhanced strength and durability. Iceman is immune to sub-zero temperatures and has thermal vision: the ability to detect objects visually by how much heat the objects generate. He is able to fashion an armor of solid ice strong enough to stop bullets. He can deposit his bodily mass into a river and reconstitute his entire mass a great distance away, transform his body into pure organic ice and to augment his organic ice form with razor sharp adornments to his shoulders, elbows, knees, and fists; reconstitute his ice-form if any part of it is damaged or completely shattered, without permanent harm to himself. He also can temporarily add the mass of a body of water to his own to increase his mass, size and physical power. He can survive not only as sentient ice, but as sentient water and vapor. He has also developed the ability to transform his body from a gaseous state back to a solid, although it is taxing both physically and mentally.[13]

Bishop, a time-traveler from the future, knew a different version of Iceman, and stated that there was a possibility that Iceman may be able to slow down other objects besides water molecules.[citation needed]

Like this? Let us know!
Retrieved from "https://marvel.fandom.com/wiki/Robert_Drake_(Earth-1610)?oldid=6448596"
Community content is available under CC-BY-SA unless otherwise noted.