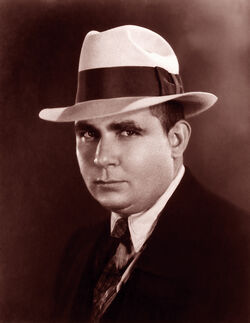 He lived in a world that was at least quasi-make-believe.

Robert E. Howard was born and spent most of his life in Texas, particularly his hometown of Cross Plains and nearby Brownwood.

He wrote for the pulp magazine Weird Tales.

Robert E. Howard was an American pulp writer most widely known for his pioneering work in the realm of swords and sorcery. He created the adventure hero Conan the Barbarian, as well as his Atlantean contemporary King Kull, the Puritan hero Solomon Kane and the Pictish king Bran Mak Morn.

Along with his correspondents H.P. Lovecraft and Clark Ashton Smith (among others), Howard developed the basis of what would become known as the Cthulhu Mythos, which was intertwined in some of his heroes' stories, such as Bran Mak Morn's Worms of the Earth" (Weird Tales; November, 1932), adapted in Marvel Comics in Savage Sword of Conan #16 (December, 1976) and #17 (February, 1977), where the Black Gods of R'lyeh (R'lyeh being the city created by H.P. Lovecraft as the dwelling place of Cthulhu) are mentioned.

In 1970, Roy Thomas and artist Barry Windsor-Smith brought Howard's work to the Marvel Universe with Conan the Barbarian #1 (after a "trial run" by creating Starr the Slayer and publishing it in The Sword and the Sorcerers, Chamber of Darkness #4). Thomas added to Howard's universe by introducing the She-Devil, Red Sonja.

Appearances in the Marvel Universe

Robert E. Howard has appeared himself in Marvel Comics:

Like this? Let us know!
Retrieved from "https://marvel.fandom.com/wiki/Robert_E._Howard?oldid=6836975"
Community content is available under CC-BY-SA unless otherwise noted.