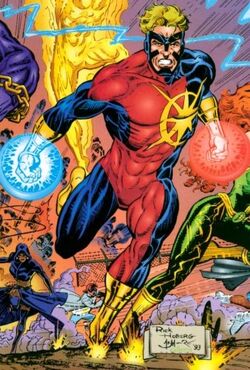 Bob Hardin and his friend Hugh Fox were college students riding the San Francisco cable car when it was struck by a jumpstart effect from the Entity on the Moon, changing everyone onboard into Ultras. Bob and Hugh joined forces with four other strangers from the cable car and the sorceress Yrial to become super-heroes.[citation needed]

Bob chose the name Atom Bob and began a relationship with the team leader, Lady-Killer, who was nearly ten years older than him.[citation needed]

Over time, the almost unlimited nature of Bob's power corrupted him. He adopted a second identity as Pilgrim and began recruiting Ultras as minions to fight the Strangers. Bob's power allowed him to create doubles of himself, so at times it appeared as if "Atom Bob" and "Pilgrim" were in the same place. During a team-up with Night Man against Pilgrim's minions, Bob's secret came out and his team were forced to take him down.[citation needed]

Able to rearrange matter on the molecular or atomic level

Like this? Let us know!
Retrieved from "https://marvel.fandom.com/wiki/Robert_Hardin_(Earth-93060)?oldid=5518771"
Community content is available under CC-BY-SA unless otherwise noted.