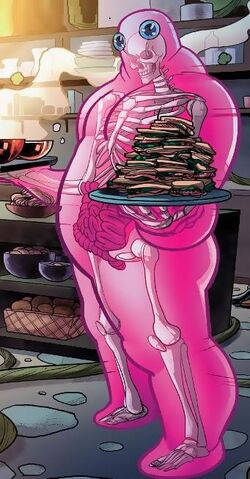 The young mutant called Glob Herman has skin that is completely transparent and made up of bio-paraffin, or "living wax" leaving his skeleton exposed. Though he lives among other mutants, Glob Herman easily stands out. He now runs with the New Mutants.

Glob Herman grew up with a father who hated mutants and a mother who supported their family. When Glob mutated his father started lashing out at him, treating him as a target to take out his anger on. Then one night his mother snuck him out of the house and drove him to Westchester and left him there, after Professor X was publicly revealed to be a mutant.[3]

At first he hated it there, surrounded by mutants who he was raised to hate, until he realized that this was where he belonged. So fueled by his hate for humans and everything his dad had done to him he joined the Omega Gang, led by Kid Omega, as they made their own stand for mutant rights. With the Omega Gang, Herman attacked the humans whom they thought had murdered Jumbo Carnation, and later participated in the slaughter of a group of U-Men. When the Omega Gang instigated a riot at the Xavier Institute, Herman had Redneck light him on fire as he ran after a bus, filled with human civilians. Herman's plan was halted by Beast, Cyclops, and Xorn, who covered him in cement to put out the flames.[4]

For his crimes, the X-Men sentenced him and the rest of the Omega team to fulfil various humanitarian works and aid those in need after serving a small sentence in human prisons.[5]

From M-Day to the Schism

After M-Day, Herman was the only Omega Gang member other than Quire himself to not lose his X-gene. After finishing his humanitarian work, he returned to the X-Mansion, now located in San Francisco and took part in the move to Utopia with the rest of the X-Men.[citation needed]

Glob moved to the Jean Grey School For Higher Learning after Cyclops and Wolverine's spilt. He made friends with Hellion and more recently Shark-Girl.[citation needed]

During a trip to the Savage Land, Wolverine told Glob that he was expelled, and he had the time of the exercise to prove himself worthy. Instead, Glob preferred to join the Hellfire Academy by contacting Sauron. He also tried to convince Quire, without success.[6]

Although being rescued with the non-X-Men students of the Academy (after it was shut down) by Sabretooth and Mystique,[7] Glob was somehow reintegrated to the school in Westchester County.[8][9][10]

Glob graduated to official X-Men status during his efforts to fight off a demonic invasion threatening innocent civilians.[citation needed]

Glob was one of the many mutants that opposed the crazed X-Man from remaking the world in his image. When X-Man realized that his vision of the world would never come about with the X-Men around, X-Man made his enemies vanish in an instant, including Glob.[11]

Glob and the mutants that vanished were sent to a different reality created by Nate Grey and a Life Seed, a world where everyone on Earth was a mutant and relationships were strongly discouraged or illegal. Glob was a student at the Summers Institute for Higher Learning in Westchester County. Like its mainstream reality counterpart, Xavier's School for Gifted Youngsters, the Summers Institute taught mutant children how to control their mutant abilities.[12][13]

Glob spent a lot of time with three chickens which he had named Hope, Logan and Scott. While feeding them he was harassed by the twins, Manon and Maxime, who claimed that he had no real friends but the chickens. As they kept on pestering him, Armor interrupted them by saying if they didn't cut it out she would report them to Dean Angel.

Armor and Glob then went to the cafeteria where Shark-Girl brought up in front of the other students that Glob was writing a fan fiction based on a mission of the X-Men and all of them were involved in this battle where Anole got hurt and Rockslide got beat up by a four-armed villain known as Forearm. Pixie then grabbed Glob's notebook in order to read it, but she was stopped by Hisako. They all decided to meet up later to study.

Glob was present during his agricultural class taught by Ms. Guthrie who was showing the students why it was so important to take care of the produce and the livestock for the community. Later that night Glob and his friends showed up to the Hope Summers Memorial Library in order to study, but there was some playful bickering among the group until Rockslide noticed a fire ablaze further downtown. Armor and Pixie decided to help out saying that Civil Management was what they trained for.

They all went to the burning house and Glob noticed that flickers from the fire started to burn the paraffin on his hand. Shortly after the entire X-Men team arrived to contain the situation. Glob disappeared from the group by going home. He received a knock on his door. As he went to open it, Hisako abruptly came in to talk to Glob. Glob while closing the door, told Hisako that if anyone would see them together, they would be in trouble, but before Glob could finish, Hisako cut him off by telling him she really needed to talk.

Hisako told Glob that she saw members of Department X at the fire and they were arresting students. Bling! was there and Hisako overheard Clerk Blob talk about how they were going to mindwipe Roxy and how he pushed the students out of the way so they wouldn't overhear what he was talking about. She also saw Anole there and she felt like telling someone, but Anole seemed very scared, so Hisako decided against it.

As she finished her story, Glob said that he could not allow this to happen again. As she mentioned that Anole said the same thing, Glob reached for a candle as he told her that there could be no more lies and that she deserved to know the truth. When she asked what he was talking about, Glob apologized, and with his hand then embroiled in flames, he reached for her explaining that it was the only way that he could show her the truth.[13]

After Nate Grey transformed all of the mutants back into their mainstream counterparts, Glob was shown standing in front of a portal in the Danger Room Prison Complex with Anole and Armor ready to return to the real world.[14]

Glob later became a citizen of the new mutant nation of Krakoa. He was among the many mutants celebrating the recognition of Krakoa as a nation.[15]

Glob joined the New Mutants team when he aided Armor to pay a visit to Beak and Angel Salvadore at their home in Pilger, Nebraska, to get them to move to Krakoa. While there they were ambushed by a cartel that found them through an anti-mutant website called DOX that reports appearances of mutants and publishes information on them. They were locked up in the basement and when they attempted to escape Beak was shot. Then Boom Boom arrived to help fight the rest of the members of the cartel.[16]

Wax Physiology: Glob Herman's body is made up of a bio-paraffin (living wax). This wax is highly flammable, allowing him to light himself on fire. He can also fling bits of himself.[17]

Like this? Let us know!
Retrieved from "https://marvel.fandom.com/wiki/Robert_Herman_(Earth-616)?oldid=6371685"
Community content is available under CC-BY-SA unless otherwise noted.