For fictional versions of Robert Kirkman as a character within comic books and/or other media,
visit this disambiguation page.
Robert Kirkman 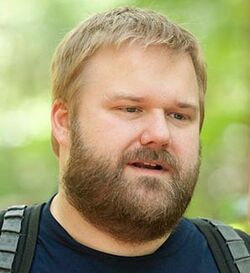 Robert Kirkman is an American comic book writer. He is best known for his work on Image Comics' series The Walking Dead and Invincible.

While pitching a new series that would be titled Science Dog, Kirkman and artist Cory Walker were hired to do a SuperPatriot miniseries for Image Comics. While working on that book, a pitch was made by Kirkman and co-creator E.J. Su for the new ongoing monthly series Tech Jacket (2002). The pitch was accepted by Image, but was canceled after only six issues, due to low sales.

In 2003, at the request of Image Comics, Kirkman and SuperPatriot artist Cory Walker created Invincible for a new "superhero" line. The story surrounded the adolescent son of the world's most powerful superhero, who develops super-powers and starts his own career as a super-hero. Walker would later fail to meet the grueling deadlines of a monthly title and was later replaced by Ryan Ottley.

Shortly after the launch of Invincible Kirkman and Tony Moore began The Walking Dead (2003), an ongoing series set in a world inspired by George A. Romero's zombie movies. Moore, struggling to keep deadlines on interior art was replaced by Charles Adlard, beginning with issue #7. Moore continued to do covers for the book, however, and eventually became one of the most popular cover artists in comics, even being nominated for an Eisner Award.

These two series have met with critical and commercial success, with Kirkman's work on Invincible especially opening the door to more mainstream super-hero work at Marvel Comics.

In February, 2005 Paramount Pictures announced that they have bought the rights to produce an Invincible feature film, and that they have hired Kirkman to write the screenplay. The series was adapted into an animated television show by Amazon Prime in 2021.

Like this? Let us know!
Retrieved from "https://marvel.fandom.com/wiki/Robert_Kirkman?oldid=6837178"
Community content is available under CC-BY-SA unless otherwise noted.