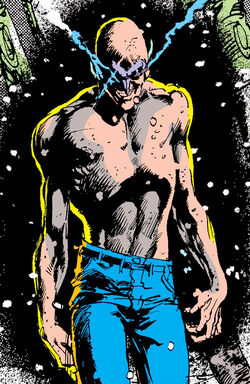 Robert Markham was born in New York City. He had an unprecedented viral infection that caused competitive inhibition of certain segments in his DNA in the process of replication. He consulted Dr. Peter Alraune, who prescribed an experimental, untested drug. The drug reacted with Markham's DNA, causing a freakish appearance and the inability to sleep. Markham discovered that he no longer needed sleep and that he developed a highly destructive psionic ability. He names himself Morpheus, after the Olympian God of Dreams. Crazed, Morpheus sought to punish Dr. Alraune, which brought him to the attention of Moon Knight, a wealthy vigilante. In the resulting fight, Morpheus was defeated.[1]

Under heavy sedation, Morpheus was taken to the Seaview Research Hospital. He was given an artificially induced sleep period every day. Which, for a time, resulted in normal dreams, but eventually Morpheus' brain underwent further mutation, and he established a mental link with Alraune. Through him, Morpheus projected nightmares into the minds of the unwilling. He eventually escaped from Seaview and sought revenge on Moon Knight and Alraune. The doctor sacrificed himself in a successful effort to cancel out Morpheus' powers. He was returned to Seaview under heavy guard.[2]

A few years later, he teams up with Black Spectre and Bushman to again try and defeat Moon Knight but he fails once again, crashing in a Helicopter just off Liberty Island.[3]

It wasn't until another couple of years that Morpheus resurfaced, this time allying himself with the Société des Sadiques to make Moon Knight suffer.[4]

Ebon Energy: Morpheus processes psychic energy differently that normal people. Without sleep and dreams to let his psychic energy bleed out naturally, it builds up in his system as "ebon energy". This energy can be released in a manner similar to telekinesis, creating a protective aura, allowing him to blast targets at a distance, or selectively lift and manipulate matter.[1]

Like this? Let us know!
Retrieved from "https://marvel.fandom.com/wiki/Robert_Markham_(Earth-616)?oldid=5621086"
Community content is available under CC-BY-SA unless otherwise noted.