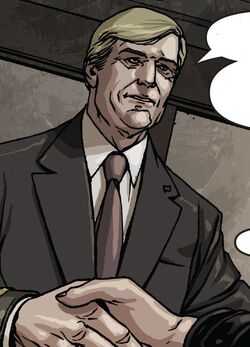 Rebel Ralston was a native of Kentucky and a founding member of the original Howling Commandos and fought alongside the team during World War II. He was also the "creator" of the Howlers battle cry "Wahoo!". After training, the unit was dispatched back behind enemy lines in France to recover a French resistance fighter who was captured by Nazi soldiers. This was a vital rescue mission since they knew the date and time of an impending Allied landing on the beaches of Normandy. With the help of Free French resistance fighters they rescued the man from the Nazis before he could be forced to talk.[1]

After the war, he was one of the founding members of the V-Battalion and the Penance Council. In more recent times he was elected Senator of Texas.

Ralston also joined the reformed S.H.I.E.L.D., as Chair of the Executive Oversight Commitee. He attended the AS3 Defense Expo, where he met with S.H.I.E.L.D. director Daisy Johnson and agent Nick Fury Jr. An encounter between the S.H.I.E.L.D. representatives and A.I.M. escalated to a fight. When Yelena Belova started to strangle Johnson, Ralston shot her. "Rebel" was quickly and unceremoniously impaled by Belova and killed. Ralston's final words were, "You tell the old man... I tried.".[2]

Horseman: Ralston was an accomplished horseman and was adept with a lasso.[3]

Standard issue WWII military weapons including rifle, pistol, 6" knife and grenades. Ralston also carried a lasso, and would use other weaponry as required. As a civilian, Ralston had a concealed weapons permit and it was common for him to go armed with a hand gun.

Like this? Let us know!
Retrieved from "https://marvel.fandom.com/wiki/Robert_Ralston_(Earth-616)?oldid=6483115"
Community content is available under CC-BY-SA unless otherwise noted.