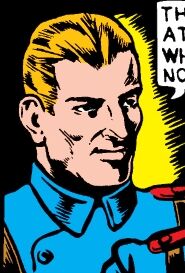 Captain Strong was just one of many costumed operatives active during World War II who were recruited into the United States Military. The purpose was to enlist such individuals in order to publish propaganda in the form of comic books that were commissioned by the United States Military and published by Timely Comics. These comics were used to convince Americans to support the war and increase enlistment. Like many heroes recruited in this fashion, Strong's fictional exploits were few. For most of these early heroes, it was due to their deaths in combat.[1]

Presumably, much like the Young Allies[2], the fictional exploits of Strong were based on actual events. For the sake of clarity, however, this article differentiates between the two.

Robert Strong was an American Soldier of Fortune who joined up with the Foreign Legion, working mostly out of Algeria during the 1940s. He was sent on a mission to setup an outpost in the desert where caravans were commonly being robbed. These attacks were by Arab thieves led by the evil Ali Hassan. Strong and his fellow soldiers forced back Hassan and his thieves with their superior firepower; Strong (disguising himself as a thief) then followed Hassan and his men back to their camp.

Spying on the thieves, he learned that they intended to ride back to the Legion's camp in the night and slaughter the soldiers while they slept. Discovered, Strong escaped the thieves and returned back to camp in time to warn his comrades. They then set up a trap for their enemies, leaving Hassan and his men to be slaughtered in an ambush. Strong took down Hassan himself, taking him prisoner to face-up to his crimes. Strong was later commended by his superiors for a job well done.[3]

Following the United States entry into World War II, Strong was drafted into the military and assigned to the Specialized Unit, Enhanced Soldiers (Or Crazy SUES) under the command of Captain America. A racist, Strong instantly came to dislike his teammate Albert "Slow Motion" Jones due to the fact that Jones was African-American. Strong almost came to blows with Jones early on in the unit's career, but the fight was broken up.

On August 7, 1942, Strong and his comrades were deployed to Guadalcanal to battle the Imperial Japanese Army.[1][4] There, he battled Japanese forces, earning a grudging respect for Jones during the course of the battle. In fact, when both men were injured during a Japanese ambush, Strong refused to leave Slo-Mo behind, throwing him over his shoulder despite the imminent danger to himself.[4] In 1944, Strong and his teammates were redeployed to Europe to assist in the Battle of Normandy.[5] He also assisted in battling the Nazis in the battle to liberate France and in Belgium.[6]

His subsequent activities with the group and ultimate fate are unrecorded[7].

Captain Strong is a fine hand to hand combatant and has received military training in both the U.S. Army and the French Foreign Legion.

Like this? Let us know!
Retrieved from "https://marvel.fandom.com/wiki/Robert_Strong_(Earth-616)?oldid=5303379"
Community content is available under CC-BY-SA unless otherwise noted.