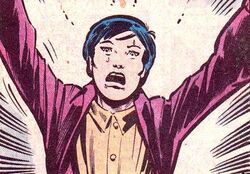 Robert Takiguchi was a young Japanese boy living in the United States. When the super-monster known as Godzilla began attacking the U.S., Robert developed a keen interest in him. Robert's grandfather Yuriko Takiguchi and another scientist named Tamara Hashioka developed the SJ3RX robot for Stark Industries - a robot designed exclusively for combating the threat of Godzilla. Dubbing the robot Red Ronin, Rob stole the device, and piloted it in order to fight Godzilla. Rob wished to prevent the radioactive creature from being harmed and his attempts to ward the monster off were designed to actually preserve his life. He succeeded in doing so and it was discovered that Red Ronin had been imprinted with Rob's brain patterns, making the robot useless without him to pilot it. Rob used Ronin a few more times, aiding Godzilla in battles against creatures such as Yetrigar and the Mega-Monsters.

When Godzilla was shrunken to six inches after being exposed to Pym Particles, Takiguchi tried to protect Godzilla from Dum-Dum Dugan's Godzilla Squad. He brought Godzilla into the sewers beneath Manhattan, but by this point, Godzilla began to slowly regrow to his normal size. When Godzilla was roughly the size of an adult human, Takiguchi tried to disguise him with a fedora and trench coat, but the monster's primal aggressiveness did not allow him to remain hidden for very long. Within a short span of time, Godzilla grew back to his full height and left the United States, seemingly forever. Robert Takiguchi's whereabouts since that time remain unknown.

Like this? Let us know!
Retrieved from "https://marvel.fandom.com/wiki/Robert_Takiguchi_(Earth-616)?oldid=5207176"
Community content is available under CC-BY-SA unless otherwise noted.