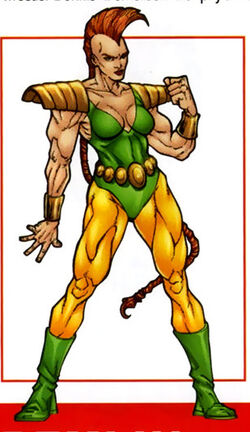 Gladiatrix was one of many empowered by the Power Broker and worked as a wrestler for the Unlimited Class Wrestling Federation. Gladiatrix and her fellow Grapplers attacked the Thing after he ran into Titania.[2]

Gladiatrix unsuccessfully applied for Avengers membership. Trying to prove herself, she attacked Darkstar, Vanguard and Ursa Major, assuming they were villains.[3]

When the Superhuman Registration Act was enacted, Gladiatrix joined Typeface's Anti-Registration Underground. The group, interviewed by Sally Floyd, was suddenly attacked by the S.H.I.E.L.D. and Iron Man. Tasked with the reporter's safety, Gladiatrix was wounded and captured. She was transferred to Prison 42 in the Negative Zone and, along with many prisoners, was released by Hulkling and participated in battle against the pro-registration forces. She was one of the few to refuse the amnesty offer which followed Captain America's surrender,[4] and was taken back into custody.[5]

Like this? Let us know!
Retrieved from "https://marvel.fandom.com/wiki/Robin_Braxton_(Earth-616)?oldid=6105767"
Community content is available under CC-BY-SA unless otherwise noted.