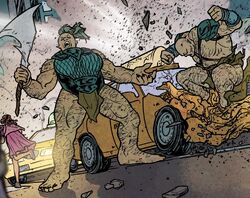 Trolls lived in scattered settlements throughout Asgard, Vanaheim, Jotunheim, and Svartalfheim, mostly in the Realm Below. The Trolls toiled as miners and metalworkers. As belligerent as the Giants, Trolls made up in craftiness what they lacked in size. Trolls tended to be extremely strong, stronger than the average God, Dwarf, or Elf, and on a par with the Giants. Certain Trolls, such as Ulik rivaled the thunder god Thor in strength. The Trolls disliked the other races of Asgard, particularly the gods, and had as little to do with them as possible unless the opportunity for conquest presented itself or they could use them as slaves.[2]

The Trolls were the least human looking of the denizens of the worlds of Asgard, possessing body characteristics that were almost simian. Trolls were stocky and massive, had thick body hair (almost fur), and tended toward a ruddy orange in color. Averaging seven feet in height, most modern trolls were taller than the Asgardian gods, but shorter than the Giants, although some Trolls were considerably taller.[3] Along with the "regular" Trolls exist Troll-Giants and Troll-Dwarves.[4]

An unknown number of centuries ago, Greyval Grimson and Balder The Brave ran afoul of a small but cunning band of rock trolls, who were on average about four feet tall. It is not known, however, whether these trolls where just smaller than others of their race, or all trolls of the age were smaller, or even if there is simply a wider variation in troll size than the current crop of Troll warriors would suggest. These trolls seemed to show a natural aptitude for casting illusions, which they often used to make their thorn-filled dens resemble grand banquet halls. They also possessed other simple forms of magic, such as the scrying Pool of Mirrors, the sedative Thorns of Sleep, and the fruit of the Trollvine, which could transform creatures who consumed it into trolls.[5]

Before the final Ragnarok, the Trolls of the Asgard Mountains were united under the leadership of Geirrodur, although coups were commonplace. After the Serpent War, Geirrodur and Ulik joined forces with Karnilla the Norn Queen to infiltrate Asgard from within using powerful magic. Ulik replaced the recently deceased Thor in the hearts and minds of Asgardia as Tanarus, altering memories so that everyone remembered him as the true Thunder God. Thor eventually returned from death, however, and ended Ulik and Geirrodur's scheme.[6]

Superhuman Strength: Whereas the average male can lift about 25 tons, Ulik is capable of lifting about 95 tons.

Superhuman Speed: In spite of his great muscular bulk, Rock Troll can run and move at speeds beyond that attainable by the finest human athlete.

Superhuman Stamina: Rock Troll advanced musculature generates considerably less fatigue toxins. Ulik can physically exert himself at peak capacity for about 24 hours before the build up of fatigue toxins in his bloodstream begins to impair him.

Superhuman Agility: Just like all members of the race, agility, balance, and bodily coordination are enhanced to levels beyond the natural physical limits of even the finest human athlete.

Superhuman Reflexes: Rock Troll's reflexes are similarly enhanced and are superior to those of the finest human athlete.

Superhuman Durability: Rock Troll's tough, leathery hide helps to render his body considerably more resistant to physical injury than a human being. His muscle and skeletal tissues are also considerably harder and more durable than those of a human. Ulik can withstand powerful impact forces such as being hit repeatedly by Thor, high caliber bullets, exposure to temperature and pressure extremes, falls from great heights, and powerful energy blasts without being injured.

Extended Longevity: Rock Trolls age at a pace much slower than human beings. While the average lifespan of Asgardian Rock Trolls is said to be 1,500 years, there are many, including Ulik, that are considerably older. Ulik is also immune to the effects of all known Earthly diseases and infections.

Regenerative Healing Factor: Despite his body's resistance to injury, Rock Trolls, can be injured. However, his metabolism enables him to rapidly heal damaged bodily tissues much faster and more extensively than normal human beings are capable of. However, he isn't able to regenerate missing limbs or organs.

Superhuman Sight: Due to living undergound all other Rock Trolls have developed superhumanly keen sight that allows them to see much farther than humans and with greater clarity. The eyes of Rock Trolls are specially developed, however, to see into the infra-red spectrum, allowing them to see perfectly in near-total darkness.

Agressive, cunning, and deceptive. Prone to treachery in their dealings with other races and each other.

Like this? Let us know!
Retrieved from "https://marvel.fandom.com/wiki/Rock_Trolls_(Orange-Skinned)?oldid=6129569"
Community content is available under CC-BY-SA unless otherwise noted.