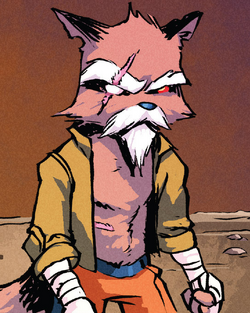 In a possible future 2046, Groot left the Guardians of the Galaxy to become a test subject on Earth, in the hope that his regenerative powers could be studied to benefit mankind. Unfortunately, his self-healing eventually kicked into overdrive after too many invasive tests, transforming him into a giant, mindless monster. As the Avengers fought a losing battle to keep him under control, Tony Stark interfaced with one of his deep-space Iron Man drones to contact Rocket on Knowhere, hoping he could persuade him to come to Earth and talk down his friend. Rocket turned him down, however, still bitter over Groot choosing the Avengers over him, and blamed Tony and his teammates for their misfortune.

Eventually, Rocket convinced himself that trying to help his friend was in everyone's best interest, and traveled to Earth in a transforming raccoon mecha ship. Though Groot destroyed the vessel and its pilot, Rocket's sacrifice was ultimately enough to bring him back to his senses. Several years later a golden statue was erected in his honor in the middle of New York, next to a very large tree.[1]

Seemingly those of the Rocket Raccoon of Earth-616.

Seemingly those of the Rocket Raccoon of Earth-616.

Like this? Let us know!
Retrieved from "https://marvel.fandom.com/wiki/Rocket_Raccoon_(Earth-15528)?oldid=5496112"
Community content is available under CC-BY-SA unless otherwise noted.