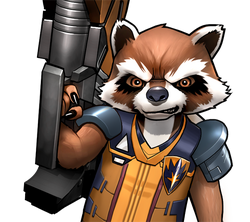 Hey, where's the closest place around here to get some space ship parts?

Rocket Raccoon was a student and the Cosmic Conservatory.

At some point Thanos, a student of the Conservatory, decided to use the Power Gem for an evil plan, Rocket Raccoon and a few of the other students tried to stop him, the students were somehow able to get the Power Gem that was now broken into shards, but Star-Lord decided to go to far and steal Thanos Infinity Gauntlet, because of that they were caught and had to escaped from him, on Thanos orders they were pursued by their fellow classmates Ronan and a group of Chitauri, they had to escape using escape pods and launching themselves to planet Earth, eventually crash landing at the Avengers Academy.

When they crashed on Earth, Rocket Raccoon and the other Cosmic Conservatory students joined the Avengers Academy and with the help of the other students they defeated Ronan and the Chitauri who followed them there to recover the Power Gem shards for Thanos.

Rocket traveled alongside a few more students to Earth-8311 to help Spider-Ham defeat the Swinester Six.[1]

Like this? Let us know!
Retrieved from "https://marvel.fandom.com/wiki/Rocket_Raccoon_(Earth-TRN562)?oldid=6100538"
Community content is available under CC-BY-SA unless otherwise noted.