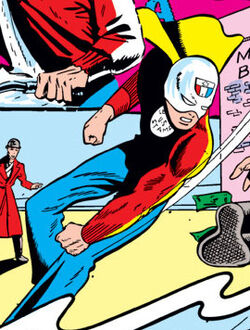 The Secret Stamp was just one of many costumed operatives active during World War II who were recruited into the United States military. The purpose was to enlist such individuals in order to publish propaganda in the form of comic books that were commissioned by the United States military and published by Timely Comics. These comics were used to convince Americans to support the war, and increase enlistment. Like many heroes recruited in this fashion, Stamp's fictional exploits were few. For most of these early heroes it was due to their deaths in combat.[1]

Presumably, much like the Young Allies,[2] the fictional exploits of the Secret Stamp were based on actual events. For the sake of clarity, however, this article differentiates between the two.

Roddy Colt was your typical patriotic teenage boy living in Freetown, USA, during the 1940s. He was a newspaper delivery boy for the Freetown Star and was friends with its star reporter, Jerry Dash. Following the United States' entry into World War II, Roddy became an avid salesman of War Stamps and formed a rivalry with another local paper delivery boy Napoleon "Spud" Sickles who delivered for the Freetown News. One afternoon in the spring of 1942, Spud had challenged Roddy to see who could succeed in getting Banker Williams to get a subscription to their newspapers or sell him some War Stamps. While out on his rounds, Roddy's brother Tommy tried to ride his bike and got run over by mobsters who drove away from the scene after stealing Roddy's War Stamps. Jerry Dash rushed Tommy and Roddy to the hospital where Tommy was put in a leg cast. Because Roddy's bike was smashed to pieces in the hit and run, Jerry decided to help his friend out by purchasing him a brand new bicycle that had a built-in radio, hoping the lad would tip him off to news stories so he could scoop the competition. Seeking to bring the men who run down his brother to justice, Roddy decided to develop a costumed identity and capture them. Inspired by the war stamps he sold, Roddy became the Secret Stamp. He soon learned that the men responsible for running over his brother were attempting to blackmail Banker Wells. Cornering the crooks, he radioed Jerry Dash to bring the police and attacked them. Caught by surprise the crooks were easily waylaid by the young masked boy. To mark his passing, Roddy pasted some of the recovered stamps on the foreheads of the crooks he knocked out, a practice that became his crime fighting trademark. After the crooks were captured, Roddy decided to continue fighting crime in the small town he called home and gained notoriety as a local hero.[3]

Freetown was hardly the sleepy middle American town it seemed to be as Roddy often found himself clashing with Nazi spies and mobsters, usually stumbling upon them through the type of vigilance citizens were encouraged to have during the war. Also, during the early period of his career, Spud Sickles came to either boast that he was either the Secret Stamp, or was good friends with him, assertions that usually landed Spud into trouble.

Roddy discovered his first spy when Mr. Lentz angrily refused to buy War Stamps. Investigating as the Secret Stamp, Roddy learned that he was a Nazi spy testing out underground bombing techniques that, if successful, were going to be used on major American cities.[4] When Spud decided to pose as the Secret Stamp, he became a target of Nazis led by the spy known only as "Granny" who was sent to Freetown to eliminate the youthful hero as he was becoming a patriotic symbol that if destroyed would crush American morale. The real Secret Stamp came to Spud's rescue and exposed the spies[5]

Later, When Roddy's pal Jerry Dash was framed for the murder of Ella Wright, the Secret Stamp helped clear his name revealing that Titus Locke, the owner of the Freetown News and Freetown's biggest tooling company, sought to silence Wright and Dash for knowing about his war profiteering and union smashing.[6] The Secret Stamp also secretly assisted Jerry in catching a pair of Nazi spies who murdered Mr. Eckerman, a local man who worked for the Bureau of Vital Statistics.[7] After this adventure, Roddy stopped associating with Jerry for reasons unknown. When the school was throwing a costume party at the home of their principal, Roddy decided to go dressed as the Secret Stamp. Along the way he was jumped by some crooks who stole his costume hoping to dupe the party goers into thinking it was the real Secret Stamp "checking" the safe they intended to rob. Roddy came too and beat the crooks into submission, reclaiming his costume and stopping them before they could steal any of the loot.[8] By this time, Spud Sickles had grown tired of Roddy's constant snubbing and foolishly decided to imitate the Secret Stamp again in order to make Roddy look bad in the eyes of their classmate Judy. As the genuine Secret Stamp, however, Roddy challenged his impostor to a duel and beat him into a confession.[9] Following this, Spud never dealt with Roddy again and ceased his masquerading as the Secret Stamp.

Next, the Secret Stamp brought loan shark Charles "Cherry" Chewatt to justice after he had those who could not pay back their loans beat to death.[10] Roddy learned to be more vigilante when he discovered "poor old" Mr. Scholes was really the Nazi spy named the Hermit, who was plotting to blow up the defense factory Roddy's father worked at. As the Secret Stamp, Roddy exposed Scholes and disarmed the bomb before it could harm anyone.[11] Roddy was next rewarded $1 million dollars when he rescued kidnapped Hollywood actor Carson Bells from Nazi spies as the Secret Stamp, but promptly donated the money to the war fund.[12]

Soon after this Roddy encountered the first of many War Bond counterfeiters, who were really Nazi spies using the money to finance their subversive activities.[13] When travelling with a classmate to sight see in Massachusetts, Roddy also discovered men stealing War Bond money from delivery trucks and led a group of local boys to their capture as the Secret Stamp.[14] Roddy's intuition also assisted in sniffing out a Nazi spy who was using his friend Tommy's letters to his brother to smuggle secrets about an American oil tanker, and as the Secret Stamp facilitated his capture.[15] Soon after this, Roddy also exposed some ration card counterfeiters, this time the men responsible were a bunch of local hoods.[16] Later still while helping the A.W.V.S. on a scrap metal drive he discovered a Nazi plot to steal black diamonds used to cut defense weapons. As the Secret Stamp, he led some local boys helping with the scrap drive prevent the spies from making their next heist.[17]

Participating in a USO play, Roddy assisted in recovering stolen money by putting on a play that would reveal the thief. The Secret Stamp helped to expose Jones, the USO show treasurer, as the man guilty of the crime.[18] In Roddy's final recorded adventure as the Secret Stamp, he helped prove that Old Man Randolf was killed by poisoned War Stamps given to him by his nephew Clint Randolf, who hoped to inherit his uncle's fortune to invest in his Nazi spy operations.[19]

In reality, the Secret Stamp was one of many costumed heroes that were drafted into the military following the United States entry into World War II. He was assigned to the Specialized Unit, Enhanced Soldiers (or Crazy SUE's) under the command of Captain America. On August 7th 1942 the Secret Stamp and the rest of the Crazy SUE's were deployed to Guadalcanal to battle the Imperial Japanese Army. During the initial firefight, Stamp's leg was broken and he was pulled from the battle.[1]

Subsequent adventures of the Secret Stamp have not been recorded and his ultimate fate is unknown.

The Secret Stamp was a fine hand-to-hand combatant.

Early in his career, Roddy also used War Stamps which he placed on the foreheads of the villains he defeated to mark his presence for the authorities.

Roddy Colt got around by bicycle. For a short time he rode a bike that was equipped with a two way radio that connected him to the matching receiver used by reporter Jerry Dash. Roddy soon abandoned this bicycle for reasons unknown.

Like this? Let us know!
Retrieved from "https://marvel.fandom.com/wiki/Roddy_Colt_(Earth-616)?oldid=4764958"
Community content is available under CC-BY-SA unless otherwise noted.