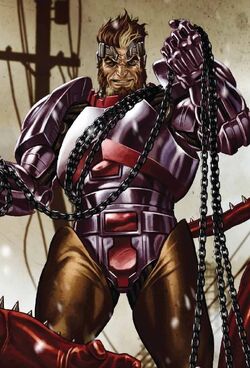 The full history of Roderick Campbell's transformation into Ahab remains apparently unclear. He became the leader of the government-sanctioned Hound program, commissioned to track down and capture mutants for internment. In this reality, Rachel Summers was Ahab's pinnacle of Hound creation, although she subsequently escaped into the current timeline, horribly mutilating Ahab by throwing him into one of his machines.

For a while, Ahab was a paraplegic in a floating chair, but later he was given bionic body parts. Ahab, now more cyborg then ever, tried to hunt Rachel down through the time-wandering spirit of the alternate future's Franklin Richards, at one point creating Hounds out of Rachel's father, Scott Summers and Franklin's mother, Sue Storm, the Invisible Woman. Ahab was defeated by the actions of the Fantastic Four and the combined X-teams.[1]

Years later, Rachel Summers finally defeated Ahab with the help of her teammates in Excalibur. She reprogrammed the Master Mold of her future, causing the Sentinels to preserve all life, even Ahab's. Ahab's ultimate fate remains to be revealed.[2]

After the events of eXtermination, he was forced to stay in this reality and time. He had also the control of Prestige back in his grasp.[3] He got to Transia where it was revealed he was attacked and wounded badly, so he got help from their government.[4] When X-Force arrived they saw him and immediately engaged. After the battle was over they found his head and body separated from each other and that he was dead. It was a huge loss for the team, because they couldn't get any information.[5]

Cybernetics: The full extent of Ahab's cybernetic powers have yet to be revealed. Presumably, his systems include enhanced strength, durability, reflexes, and senses.

Ahab's technology allows him to mark, clothe, and mentally control his legion of mutant Hounds.

Energy Harpoons: can generate powerful energy harpoons that are formed from, and attached to, his own life force. A hit from one of these harpoons can kill or seriously injure the target, and anyone who attempts to grab a harpoon gets burned. Each harpoon is keyed to its target's genetic structure, and cannot be moved or deflected by energy; it only stops when it strikes its target, or a close blood relative thereof.

Like this? Let us know!
Retrieved from "https://marvel.fandom.com/wiki/Roderick_Campbell_(Earth-811)?oldid=5491004"
Community content is available under CC-BY-SA unless otherwise noted.