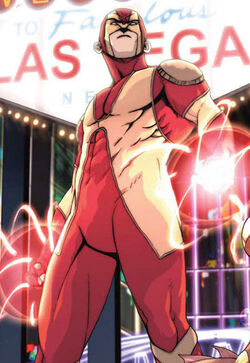 There used to be times where I felt like there was nothing I could do. Cornered. Stuck. Helpless. I don't feel that way anymore. I'm not a fan of sacrifices. Me, I've had to sacrifice. I've said goodbye to pieces of myself when I needed to. I've lost the trust of people I love. But sometimes... Sometimes that's just the way it works out.

Roger Brokeridge was born in a middle class suburb of Los Angeles, his early life is mostly unknown. At some point his brother Paul got enhancements from a new Power Broker, giving him an immense physique and strength. Paul then joined the Unlimited Class Wrestling Federation, but suffered an intense injury, leaving him immobile, and costing his parents an immense amount to treat him. Angry over how this was affecting his family, Roger tried to work up the courage to kill his brother and end their familial suffering, but he ultimately couldn't do it. Deciding, instead, to kill the Power Broker for giving his brother the powers, Roger approached him, but was ultimately convinced to gain power himself. Undergoing an immensely painful procedure, he gained the ability to create balls of hard light.[2]

Intending to turn to crime in order to help pay off his debts to the Power Broker, Roger cased the route of an armored truck. When he finally planned to rob the truck, he accidentally prevented the truck from hitting a young girl. Thinking he had saved the girl on purpose, the guards thanked him. An arriving Wonder Man also thanked him, and convinced him to the join the Initiative. Since becoming a hero wasn't profitable, the Power Broker sold his contract to Hydra.[2]

One of the new Initiative recruits that arrived with Rage, Cloud 9, MVP, and others, Brokeridge displayed an outgoing and arrogant personality, hitting on Thor Girl on the bus ride in and cracking a joke about not having a cape when receiving his fatigues. During the training mishap with Armory he exhibited the ability to create an energy ball that deflected the lethal blasts from Armory's Tactigon.[3]

On his first mission, he helped defend the President against an assault from Hydra. As he returned from the mission, he accidentally witnessed Komodo depowered while she slept. Awaking, Komodo grew angry and attacked him, only backing off when forced to by Gauntlet.[4]

Arriving back at Camp Hammond, he was involved in a several training exercises, including being taught water safety by Stingray. At the end of the day, he participated in an assault exercise with several of his teammates as they attempted to "assault" the Thing. After this final exercise, he headed into town where he was treated as a villain until Senator Arthur Woodman, a Hydra agent approached him with knowledge of Roger's real name. Woodman then forced Roger to steal a vial of Super-Power Inhibiting Nanobots from Camp Hammond, causing problems later on for Iron Man when he battled the Hulk during World War Hulk.[5]

Brokeridge was present at Camp Hammond when KIA, a rogue clone of the deceased MVP, attacked the trainees and their mentors, in a hunt for anyone present when MVP was killed as well as those involved in the ensuing coverup. Brokeridge and Komodo were caught fraternising moments before the attack began.[6] Brokeridge accompanied Komodo and Cloud 9 to Tennessee through a Negative Zone portal in an attempt to use another clone to help shut down KIA but the group were attacked by a recently reformed New Warriors who would call themselves Counter Force, who believed they might be being misled by the Initiative. When KIA arrived and attacked, Brokeridge helped to fight against him alongside the others, and had to amputate Komodo's damaged legs so she could regrow them.[7] Soon after this he attended the funeral of Trauma, who returned to life during the viewing of his body.[8]

Roger along with Komodo, Cloud 9, Ultra Girl, 3-D Man, Thor Girl, Trauma. All of which, with the exception of Trauma, were given states to protect as graduated members of The Initiative, along with new costumes. Roger was then assigned to Nevada's Initiative team, the Heavy Hitters.[8]

During the Skrull invasion Roger and the Heavy Hitters, including Gravity, Nonstop, and Telemetry, helped the Skrull Kill Krew and 3-D Man deal with a Skrull infiltrator posing as an unnamed Heavy Hitters team member. He then left with Komodo, 3-D Man, and the Krew to help the other Initiative teams.[9]

After the invasion, Hardball's status as an agent for Hydra led to a confrontation against the rest of the Heavy Hitters and a visiting Komodo. Hardball killed Senator Woodman, effectively becoming the new leader of Woodman's Hydra cell. This ended his relationship to the Initiative and to a saddened Komodo as well.[10]

Hardball was revealed to be running a Hydra training camp in Madripoor and became the lover of Scorpion (Carmilla Black). The Shadow Initiative arrived in Madripoor to capture him, only to be caught off guard with enhanced S.P.I.N. Tech darts that blocked Komodo's powers. The Shadow Initiative briefly retreats, returning and claiming they wish to switch sides, allowing them to gain access to the Hydra base's weapons, and take them down from within. During the fight, it was revealed that Hardball only joined Hydra because he had no alternative. He willingly surrendered to Constrictor, and was incarcerated in the Negative Zone prison.[11] Hardball was conscripted by Blastaar to serve him when he invaded the prison, but Hardball aided the Shadow Initiative when they arrived to liberate the prison. He was then placed on the Shadow Initiative as a result of his efforts, prompting Komodo to quit the team.[12]

During the last hours of Norman Osborn's time in power he injected Komodo with a serum that neutralized the S.P.I.N. Tech in her, restoring her powers.[13]

Hardball was later among the heroes on the side of Alchemist (Jeremy Briggs) in his fight against Avengers Academy.[14]

Used an Avengers Issue Jet-Pack on his first mission.[1]

Like this? Let us know!
Retrieved from "https://marvel.fandom.com/wiki/Roger_Brokeridge_(Earth-616)?oldid=6461803"
Community content is available under CC-BY-SA unless otherwise noted.