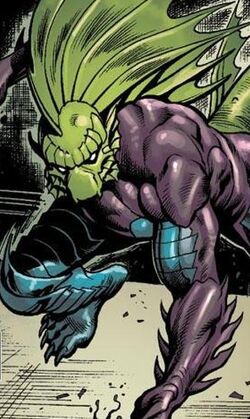 Roland Burroughs underwent surgery thanks to the Roxxon Oil Company, giving him gills, claws, and a bionic tail, as well as certain other physiological changes. As a result of a mistake during the surgery to give him gills, Burroughs was rendered mute. He was also given a special costume and the alias Death Adder and joined the Serpent Squad along with Sidewinder, Anaconda, and Black Mamba. The Serpent Squad's first mission was to get the Serpent Crown, and once this mission was complete, the four of them became freelance mercenaries and criminals.[1]

The Serpent Squad were later joined by a handful of other snake-themed villains and formed the highly organized team of criminals and mercenaries known as the Serpent Society. One of the Society's first missions was to kill the rogue A.I.M. leader known as M.O.D.O.K.. Death Adder was instrumental in the assassination, his poison finishing off their target.[2] One of the other members, Princess Python, showed cowardice and betrayed them on this mission, and after her memory was wiped, he was sent to return her to her former team, the Circus of Crime. While they were in transit, the Serpent Saucer Death Adder was flying malfunctioned and crashed into the South Bronx. Leaving Princess Python in the saucer, Death Adder went to get help. He hailed and hijacked a cab which, unfortunately for him, was driven by Scourge who promptly killed him with an explosive bullet.[3]

After his death, Death Adder (or rather a facsimile thereof) was one of a number of villains temporarily resurrected by the alien Grandmaster to compete in battle against the Avengers in a wager against Death. During the battle, Death Adder fought against the Avenger Tigra, and though he was mortally wounded by her claws, his tail struck her and poisoned her, killing her (before she was later resurrected along with any other Avengers who were killed).[4]

More recently, Death Adder was one of many of Scourge's victims resurrected by the criminal the Hood to serve in his gang.[5]

Some time later, he joined Crime-Master's Savage Six and was killed by Venom.[6]

As a result of the biogenetic treatment and changes made to his body, Death Adder acquired a number of super-human powers. He was amphibious, able to breathe under the water by extracting oxygen molecules from the water by means of gills installed in his body. There was apparently no limit to the time that Death Adder could remain under water.

Death Adder's physiology was also transformed by means of a series of operations, giving him a tail and claws. The tail, which was around four feet in length. Death Adder's tail was connected to his nervous system, meaning he could control it like an extra limb. Adder could use the tail to strike at great speed, since it could reach a speed of up to 60 miles per hour through the air.

In addition, the tail was decorated with sharpened prongs, impregnated with a fast-acting poison that was of sufficient strength to be able to kill even superhuman victims like M.O.D.O.K. and Tigra. This poison was also in his claws.

Death Adder's skin was modified allowing him to survive the low temperatures and the high pressures of the ocean depths, enabling him to descend to depths up to 400 feet. His strength was also enhanced in order for him to be able to survive the pressure of the ocean. A special membrane protected his retinas, to allow his eyes to adapt to the bluish-green light of the depths of the ocean.

Death Adder could swim at speeds of up to 35 miles per hour.

Death Adder has superhuman strength, and could press approximately 1 ton on land.

Death Adder had a bionic tail and Death Adder Venom contained in the claws on his fingertips and the tip of his tail that would paralyze his victims and eventually prove fatal.

Like this? Let us know!
Retrieved from "https://marvel.fandom.com/wiki/Roland_Burroughs_(Earth-616)?oldid=5709809"
Community content is available under CC-BY-SA unless otherwise noted.