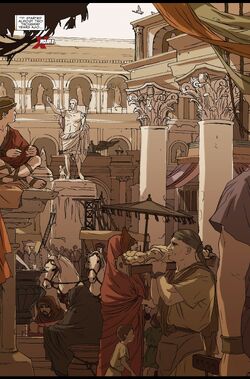 Aeneas and the Forgotten One

Circa the 11th century, Aeneas,[1] a survivor of the Trojan War,[3] and his men, including the Eternal "Hero" conquered Latium,[1] and united the Etruscan tribes that would one day found Rome.[4]

Etruscan and Greek influence waxed and waned from the 9th to 5th centuries BC, Rome became dominant thereafter, unifying the peninsula by conquest and colonization.[1]

Around 200 B.C., the Robe of Evil fell into the hands of a brutal tyrant named Peragmum the Ruthless until he was killed.[8]

In the 2nd and 1st centuries BC, Rome absorbed Greece, introducing the worship of the Olympian gods among the Romans, under different names.[1]

By 59 B.C., Julius Caesar was among the most popular men in Rome. As a veteran to many successful campaigns that had contributed to extend the influence of Rome through Northern Europe, he was elected by the Centuriate Assembly as "Senior Consul of the Roman Republic". He shared the Consulate position with both Pompey the Great and millionaire Marcus Licinius Crassus. Despite his obvious benefit to Rome, Caesar's moves were often blocked by the corrupt Roman Senate.[9]

Around 57 B.C., Caesar led the Roman armies and conquered the northern part of Gaul, fighting its inhabitants, a mixture of Germanic and Celtic tribes, the Belgae, whom he described as the bravest of the Gauls.[10] By 55 B.C., Caesar's first Roman expedition arrived in Britannia,[11] where he fought the Celts who didn't unite against him.[12]

The same year, Harley Davis and Killpower were accidentally sent back in time to ancient Rome and landed a Colosseum with gladiator battling lions. Their apparition scared the lions, who nearly killed Julius Caesar. Harley used her sonic cry to knocking the lion aside. They then escape back to the future.[13]

Playing one tribe against another, Caesar eventually conquered all of Gaul[12] by 52 B.C.[14]

In 50 B.C., Caesar was ordered by the Senate to disband his legions and return to Rome. Caesar saw that demand as an illegal act, as his consulship was legitimate and yet he was forbidden to stand for a second term. On January 10th in the year 49 B.C., accused of insubordination and treason, he brought his single legion to the Rubicon, the natural border marking the edge of his territory and parting Gaul from the rest of Italy. Despite unwilling to fight, Caesar refused to back down, refusing to die in Rome. There, he stated Alea Iacta Est ("the die is already cast"), and crossed the Rubicon, engaging the defenders of Rome and defeating them, expecting to reach Rome by the end of the week.[9]

Caesar became Dictator,[1] while being usually thought of as Emperor.[15]

Circa 47-49 B.C., a civil war erupted in Egypt as Caesar attempted to put Cleopatra on the throne in place of her brother Ptolemy (supported by Zota of Pergamum). During the siege of the palace by the Egyptians led by Ptolemy, Caesar and Cleopatra were approached by Doctor Strange and Clea. It was told that it was during that event that the Great Library of Alexandria was burned down, though it was in fact (as Lucan would later wrote) warehouses in which grain and books were stored that were burned due to a defensive fire set by Caesar's troops near the docks. Nevertheless, the theory of Caesar burning the Library became a popular legend,[16] and is still mentioned.[17]

During the Battle of Thapsus, Caesar's Fifth Legion repelled a charge of Elephants of War. At that time, an alien observer had came witness his life. After the battle, Caesar would commemorate the event by creating a coin featuring the pachyderms. Caesar would have an accident while riding an elephant who was frightened by a serpent, resulting in his death before his appointed time. The alien feared that is was his presence who had altered the timeline, and so decided that in order to prevent a time paradox, it would continue Caesar's destiny by taking possession of Caesar's body, until his assassination in 44 B.C.[15]

In 44 B.C., "Julius Caesar" was assassinated on the Ides of March by Marcus Brutus and the Senators.[15] The immortal Neanderthal Cole[18] and the immortal Maha Yogi witnessed this event,[19] while the Fantastic Four were involved in helping the Caesar impersonator.[15]

They hoped to bring back the republic, but civil war broke out instead.[19] Caesar's foster son Augustus battled for control of Rome.[1]

After "Julius Caesar"'s "assassination", Augustus battled for control of Rome, and proclaimed himself Rome's first emperor in 27 B.C.[1]

In 41 BC, Marc Antony, one of the triumvirs, was given the Eastern sphere of the Roman Empire to rule. There, he met and fell in love with Cleopatra, the Queen of Egypt, who was also a consort of Julius Caesar during his life. Despite marrying Octavius's sister Octavia, Antony continued to lust after Cleopatra. This lead to war with Octavius, which Antony lost, in part because Cleopatra withdrew her fleet at a crucial moment. Aware that Antony was furious with her, Cleopatra sent him false news that she has killed herself because of him. Thus convinced of her love, Antony fell on his sword to join her in death. Upon hearing of this, Cleopatra committed suicide by allowing herself to be bitten by a poisonous asp.[20]

In 1 BC, Augustus decreed that a census be taken, and every person in the entire Roman Empire had to go to his own town to register. A young couple from Nazareth, Joseph, being of the line of King David, was required to go to Bethlehem to register with his wife Mary. While in Bethlehem, Mary gave birth to a son named Jesus Christ the son of the God of the Israelites. his teaching would change the world for centuries to come.[21]

In 25 A.D., a man from the 20th century traveled back in time to the Roman Empire and set himself up as king, but all the present day devices he had brought back with him to prove his claims do not work without electricity, fuel, and broadcasting stations.[22]

In 30, A.D., Jesus Christ's visited the city Jerusalem during "Passover" which would later be known as the "Last Supper". Jesus told his followers that one of them would betray him. On Friday, Roman soldiers arrested and tried Jesus and nailed him to a cross. When Jesus died, his friends placed his body in a cave and covered the cave entrance with a rock. On Sunday, a friend of Jesus named Mary Magdalene went to the cave. The rock had been rolled away and the cave was empty an angel appeared and said Peace be with you. Jesus is risen from the dead. He then visited his disciples himself to tell them to spread the word of god throughout the world begin Christianity.[23] After his death and as his followers grew in number objects related to him became highly sort after such as the Spear of Destiny which supposedly the spear a Roman soldier used to kill Jesus[24] and the Holy Grail, supposedly a cup in which Jesus turned water into wine at the Last Supper.[25]

In 32 A.D., Caligula became Emperor of Rome. He sent troops to conquer the deepest region of Africa,[26] Wakanda, but the Black Panther and the Wakandans would beat them back using deadly force each time.[27] Flavius Scollio was sent by his commander to investigate an anomalous phenomena, which he discovered was a crashed alien spacecraft. The craft was inhabited by a single alien, which Flavius killed. He then donned the armor which imbued him with power to mentally manipulate his surroundings and advanced longevity. Using the armor, Flavius created the Black Tower of M'Kumbe in Wakanda, which housed a kingdom modeled after ancient Rome inside, where he resided for centuries.[26]

In 54 A.D., Nero became Emperor of Rome. It was during his reign that the 20th century time traveler Tommy Tyme and was forced to battle in the gladiator pits. He survived and Nero ordered his execution by lion. Tommy held off the lions with is slingshot before returning to his own era.[28][citation needed][verification needed] Tommy returned again to an unspecified year to learn more about Roman sportsmanship.[29]

In 64 A.D.[citation needed], Nero set fire to Rome and blamed the Christians for it.[citation needed] At some point, agents of the Clan Akkaba, and it was said that Clan Akkaba was there to "light the flame" when Rome burned.[30] Sersi was present during Nero's burning of Rome and was assisted by Makkari.[31]

In 79 A.D., Mount Vesuvius erupted, destroying the city of Pompeii.[32]

The same year, all the south of the British Isles was under Roman control. Fortifications such as Hadrian's Wall would be erected to keep the barbarians in the north from raiding the south.[11]

Bran Mak Morn, a Pict king rebelled against the Romans after having been forced to watch one of his people being crucified.[34]

At some point the immortal Selene Gallio had an eye on Senator Eliphas, who was used by others for their own benefit. She came before him, offering him her eternal love and immortality - if he helped her sacrifice the countless souls of Rome. The thousands of souls that she would feed on would allow her to become as powerful as a god. She instructed her pawn to draw symbols around the city in his own blood for the ritual.However, Eliphas performed a small act of compassion by telling a slave girl he gave ruby earrings to about what was going to happen. Her father informed the authorities, who captured both Eliphas and Selene and sentenced them to be burned at the stake. Selene awoke before it could happen and set the flames back against their would-be executioners. Furious at Eliphas for seemingly betraying her, she took his life-force and transformed him into a vampire-like creature, swearing that he would never see her again.[35]

In 281 A.D., upon starving to death, Decimus Furius' mutant powers emerged. He was consequently attacked and killed dozens before being imprisoned. After years of imprisonment, he was sent to the Colosseum as a gladiator and battled everyday for the next few years of his life for his survival and eventual freedom, and became worshiped as being the dark god Minotaur. Decimus was watched by the eternal mutant Apocalypse and selected as his Final Horseman War in the event that all other plans of Apocalypse failed.[36]

For the story of the Eastern Roman Empire, or Byzantine Empire, please consult this page.

At the beginning of the 5th century, the Romans retreated from the province.[11]

In 451 A.D., Attila the Hun, the ruler of the Hunnic Empire, attempted to invade Champagne-Ardenne but was thwarted thanks to the assistance of 1940s time traveler Tommy Tyme during the battle of Chalons, whose knowledge proved useful to Roman general Flavius Aëtius, who drove Attila and his minions back.[38][citation needed][verification needed]

In 476 A.D., when the last Roman Emperor, Romulus Augustus, was deposed, the Western Empire came to end, and fractured into smaller kingdoms.[1][39]

The legacy of the Roman Empire is the set of cultural values, religious beliefs, and the technological and other achievements of Ancient Rome that were passed on after the demise of the empire itself and continued to shape other civilizations, a process which continues to this day.

Over the years, Flavius Scollio captured people from the surrounding area to be his subjects, including the Fantastic Four and Black Panther when they arrived to investigate the tower. Flavius fancied the Invisible Girl with the intention of making her his wife but his plan was foiled when she removed the helmet, which destroyed everything he created and reduced Flavius to a pile of bones.[26]

Like this? Let us know!
Retrieved from "https://marvel.fandom.com/wiki/Roman_Empire?oldid=6127579"
Community content is available under CC-BY-SA unless otherwise noted.